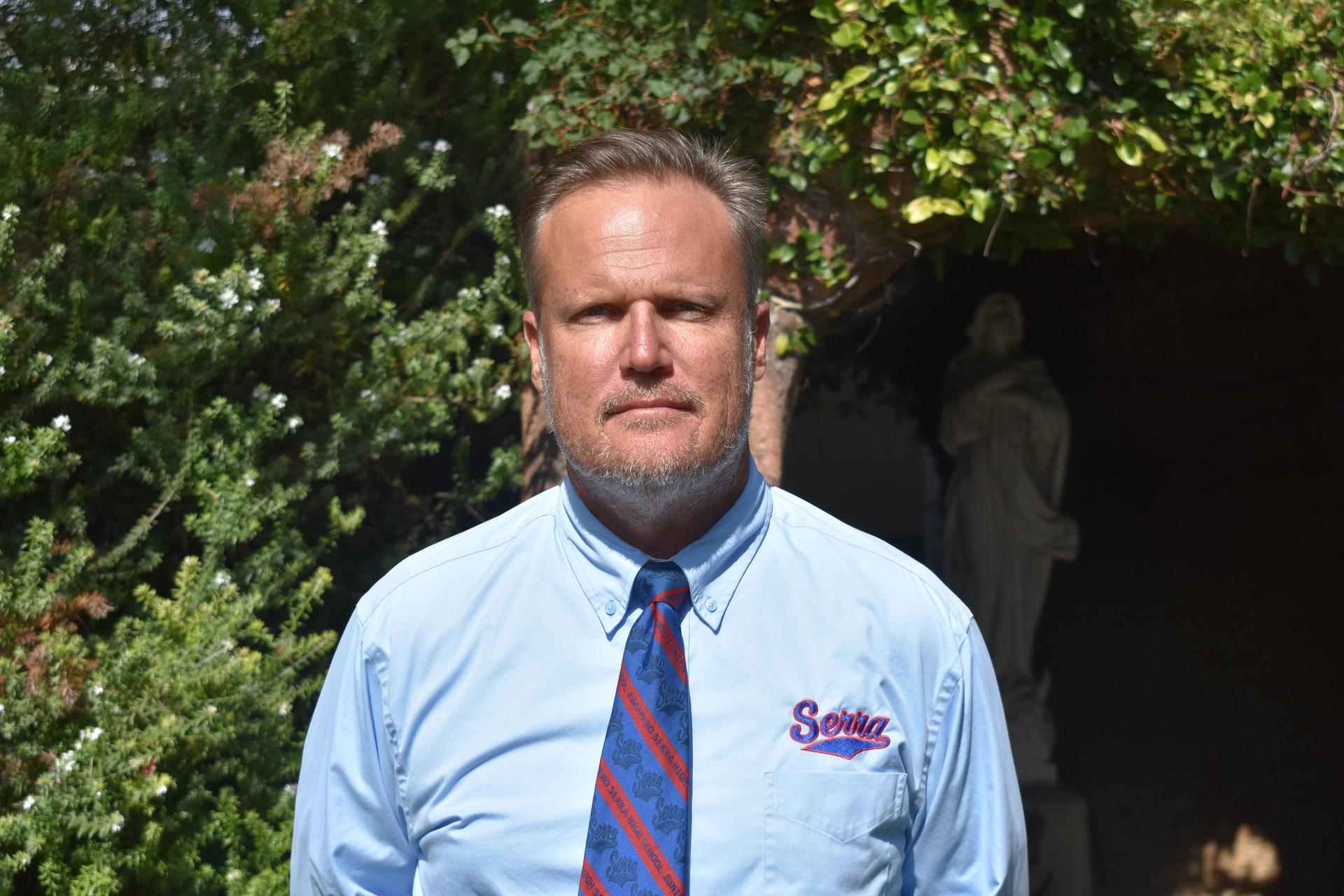 Scott Altenberg (Football - Head Coach)
Scott Altenberg has been at Junipero Serra High School for 27 years (21 as Head Coach).  "I am very proud of what we do at Serra. A successful program needs not only great student-athletes and quality coaching but also dedicated supporters as well.
Academically, we send 100% of our students to college. Athletically, we have a rich tradition of CIF championships, Division 1 scholarships, and have been blessed to have a number of NFL players as well. 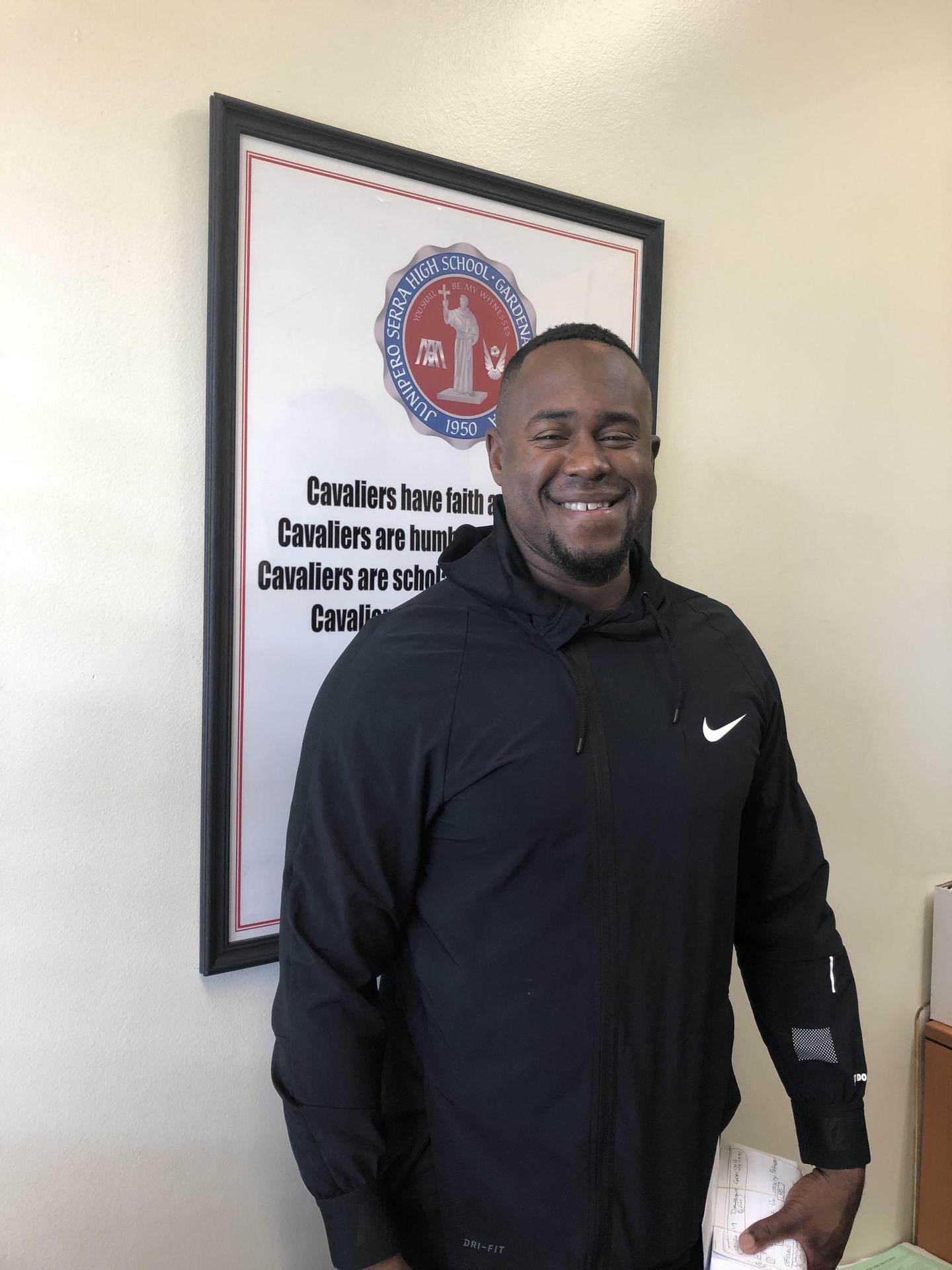 Bernard McCrumby (Boys Basketball - Head Coach)
Coach Bernard McCrumby's is in his 11th year at coaching Serra high school and 3rd year as the Varsity Head Coach.  He worked for 7 years as an Assistant Coach to Dwan Hurt.  Coach Bernard helped guide the Cavaliers to 4 CIF Championships 10, 12, 13, 16 and one State Championship in 2010. Coach Bernard McCrumby has over 15 years on Coaching experience. Prior to Serra High School, Bernard worked as an Assistant at his Alma Mater, St. Bernard High School under Coach Bob Alaniz helping guide the Vikings to two CIF Championship appearances.
Coach Bernard earned his Bachelor's Degree in Urban Studies and Sociology and a Masters in Educational Counseling from National University.  He is a City Planner for the City of Inglewood and is married to his beautiful wife, Danielle. 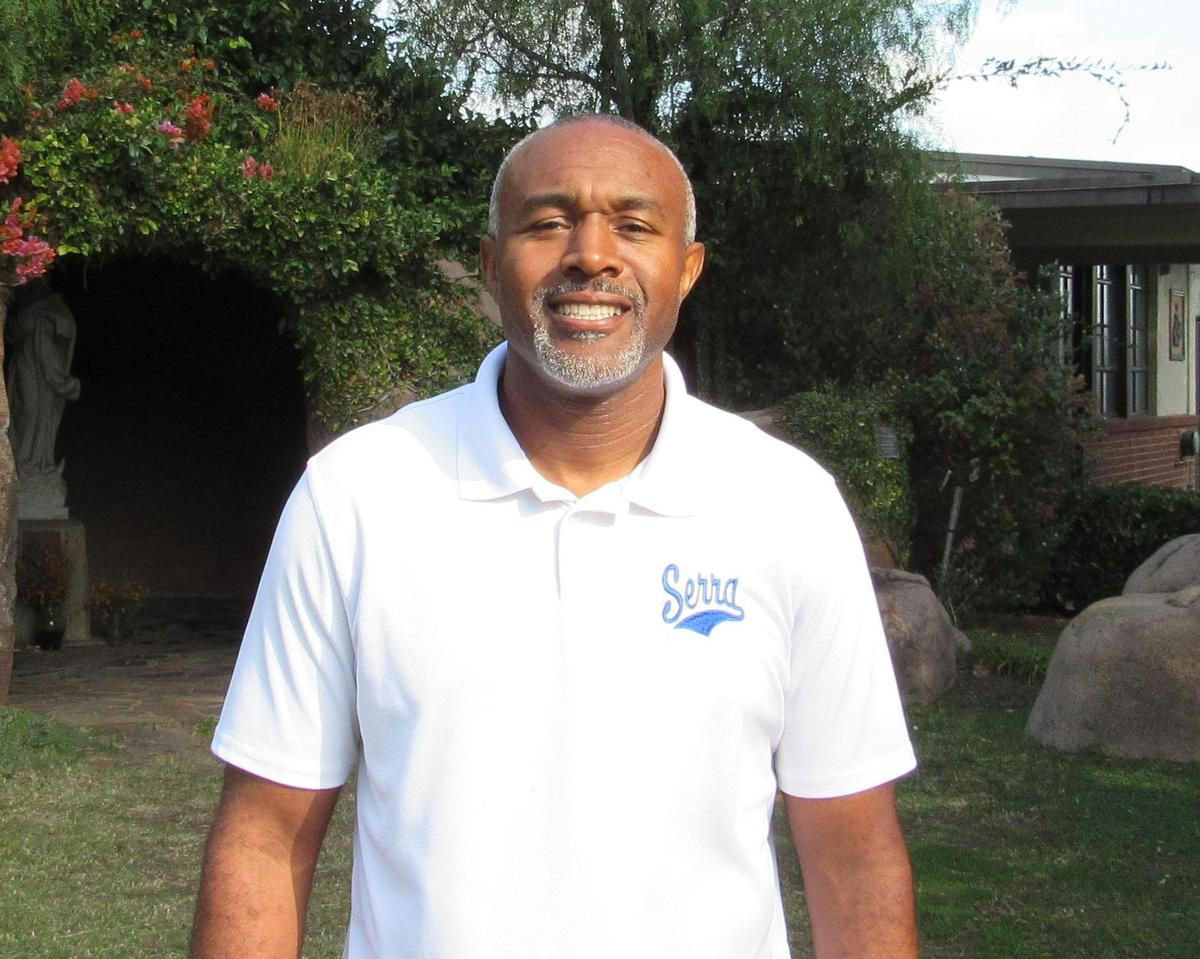 McKinsey Hadley (Girls Basketball - Head Coach)
Coach McKinsey Hadley began coaching basketball in 1991, where he developed his coaching philosophy in Park Leagues and on the AAU basketball circuit. His love for the game was honed by many years of playing in inner city L.A. in the 1980's.  Coach Hadley attended LACES High School and Serra High School, graduating from LACES in 1992.  In 1998, he became the Associate Head Boys' Basketball Coach at LACES, where he stayed for 8 years.
In 2007, McKinsey became the Head Girls' Basketball coach at Serra, where he coaches presently.  His accomplishments include the following:
Coach Hadley enjoys teaching the game of basketball as a way to build and reveal character.  He promotes the importance of inner strength and self-discipline.  His teams have exemplified the power of personal growth as a way to positively affect overall team success. 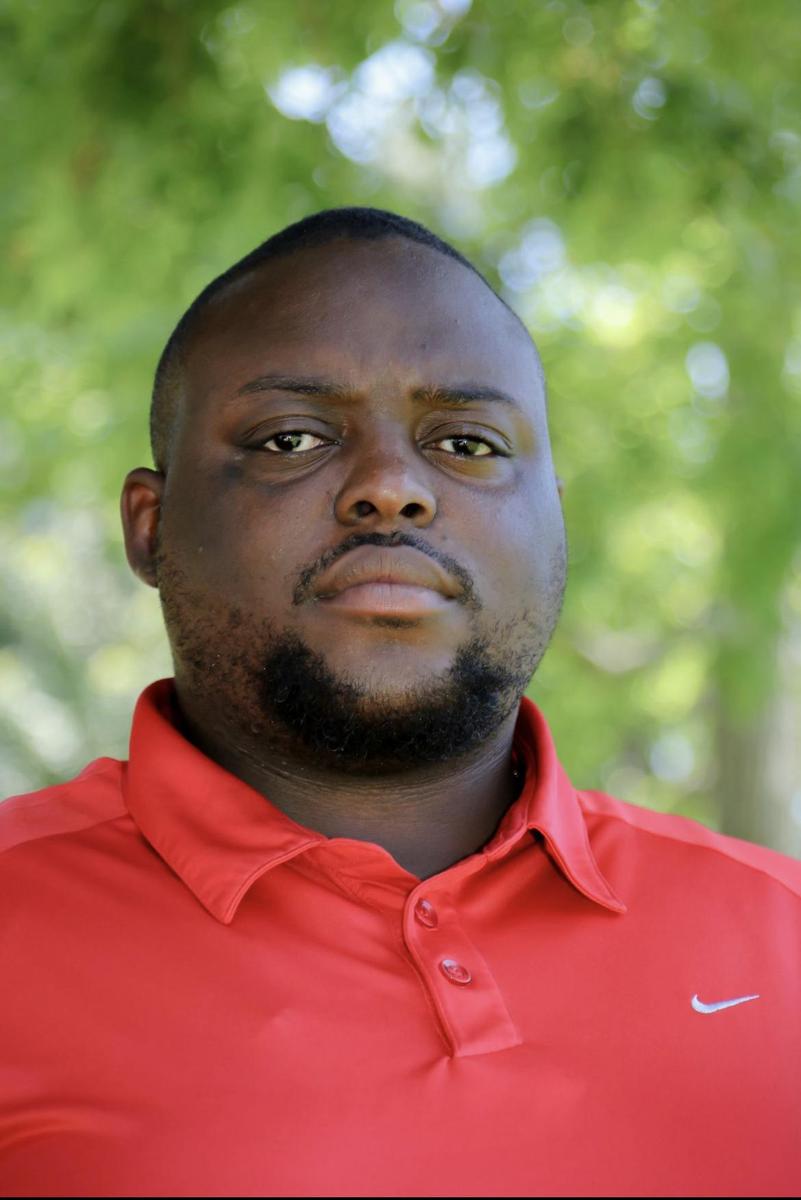 He furthered his baseball career at West Los Angeles Community College, Cal State Dominguez Hills, and attended UNLV. He holds a bachelor's degree in Communications from Grand Canyon University and a Master's Degree in Communication with an emphasis in Education also from Grand Canyon University. Coach Perry also served as an MLB scout for 6 years with the Atlanta Braves and 2 years with the Boston Red Sox. 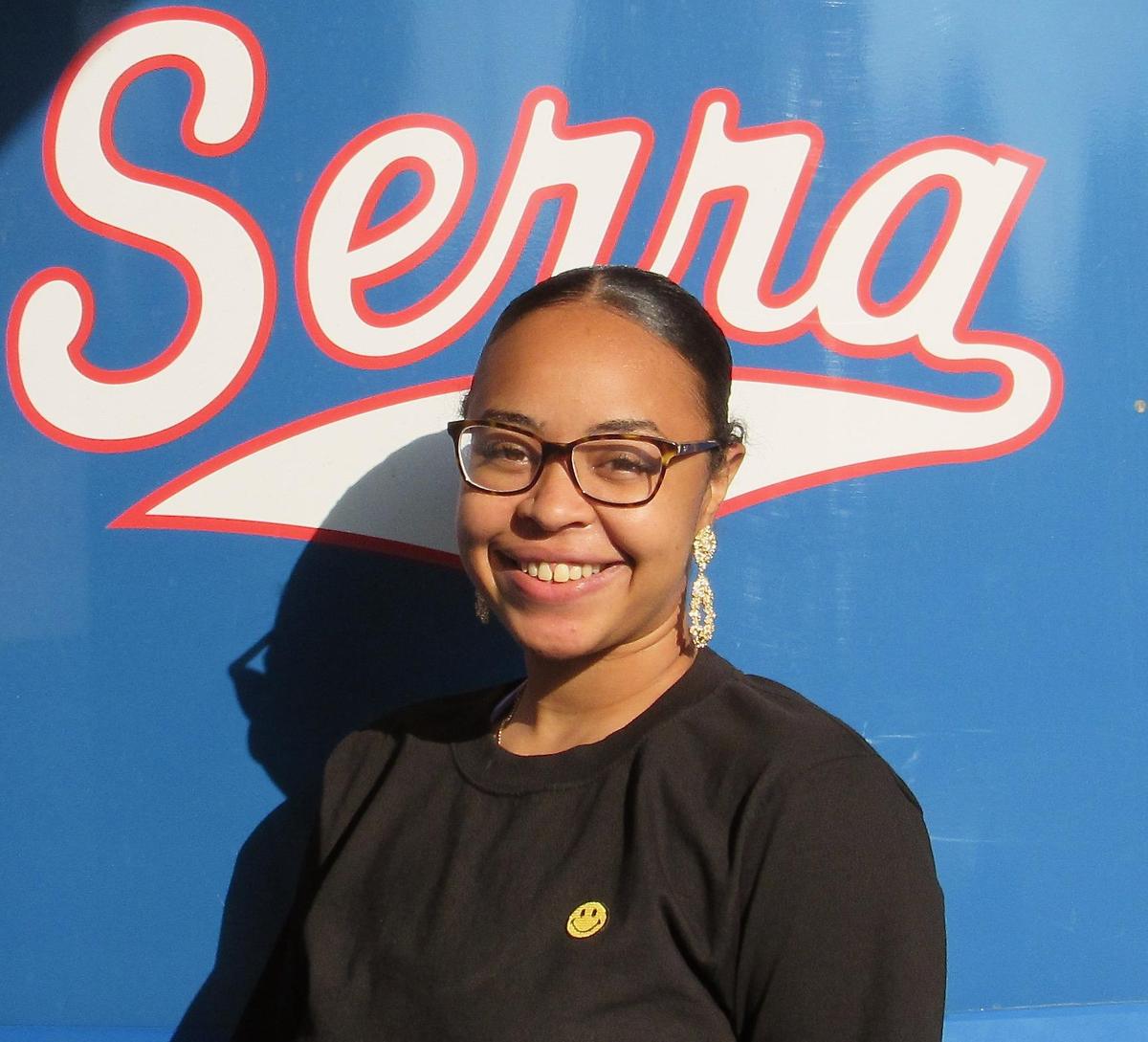 Dejanae Gore (Girls Cheer - Head Coach)
Dejanae Gore has a wealth of knowledge in the sport of cheer. She was a cheerleader from the age of 3 until she graduated college, and has over 10 years of coaching experience. Coach Dejanae was on Varsity at Lakewood High School and went on to become the Captain of her team at Langston University.
In 2018, she coached and led her team to their first ever Grand Championship, and has several other first place trophies under her belt.  Her experience includes stunts, gymnastics and choreography. 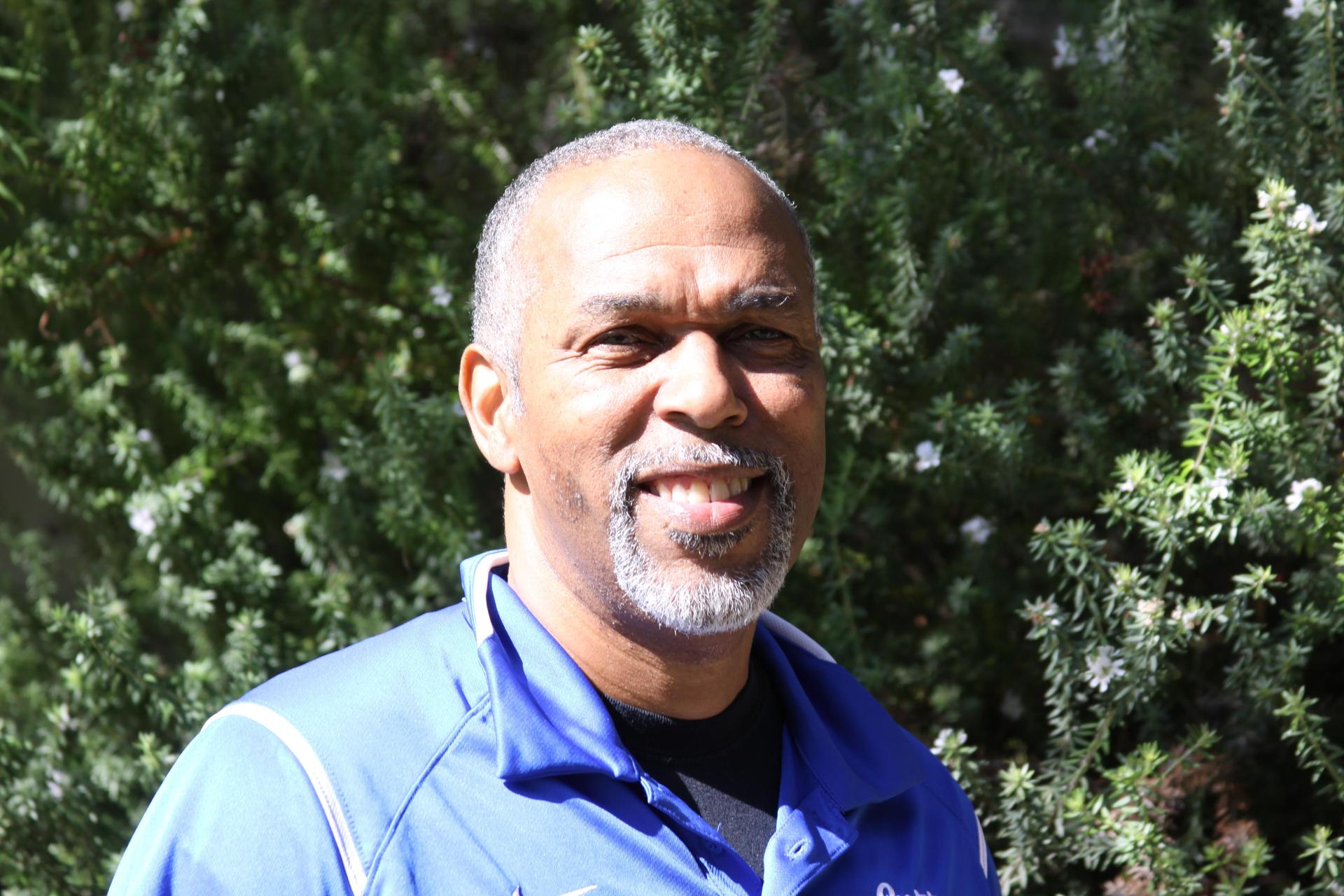 Daryl Adams (Girls Volleyball - Head Coach)
Coach Daryl Adams has been playing since he was 15 at Los Angeles High School. Twice outstanding defensive player, all league 2 years. Went on to play recreational ball, and then organized tourneys at the national level. He started training players privately, which led to his coaching job at Westchester High School leading them to their first City Championship in over 2 decades. He came to Serra to help a friend, which led to the Head coaching position. "Coach D" as he is called focuses on academics with access to volleyball. He currently has 16 kids to his credit with scholarships, 4 pros, and 4 coaches.
Outside of coaching, he plays on many recreation teams plays all over the country. He loves Sunday rides on his Harley and spending time with friends.
Christopher Mack (Head Coach Track & Field) 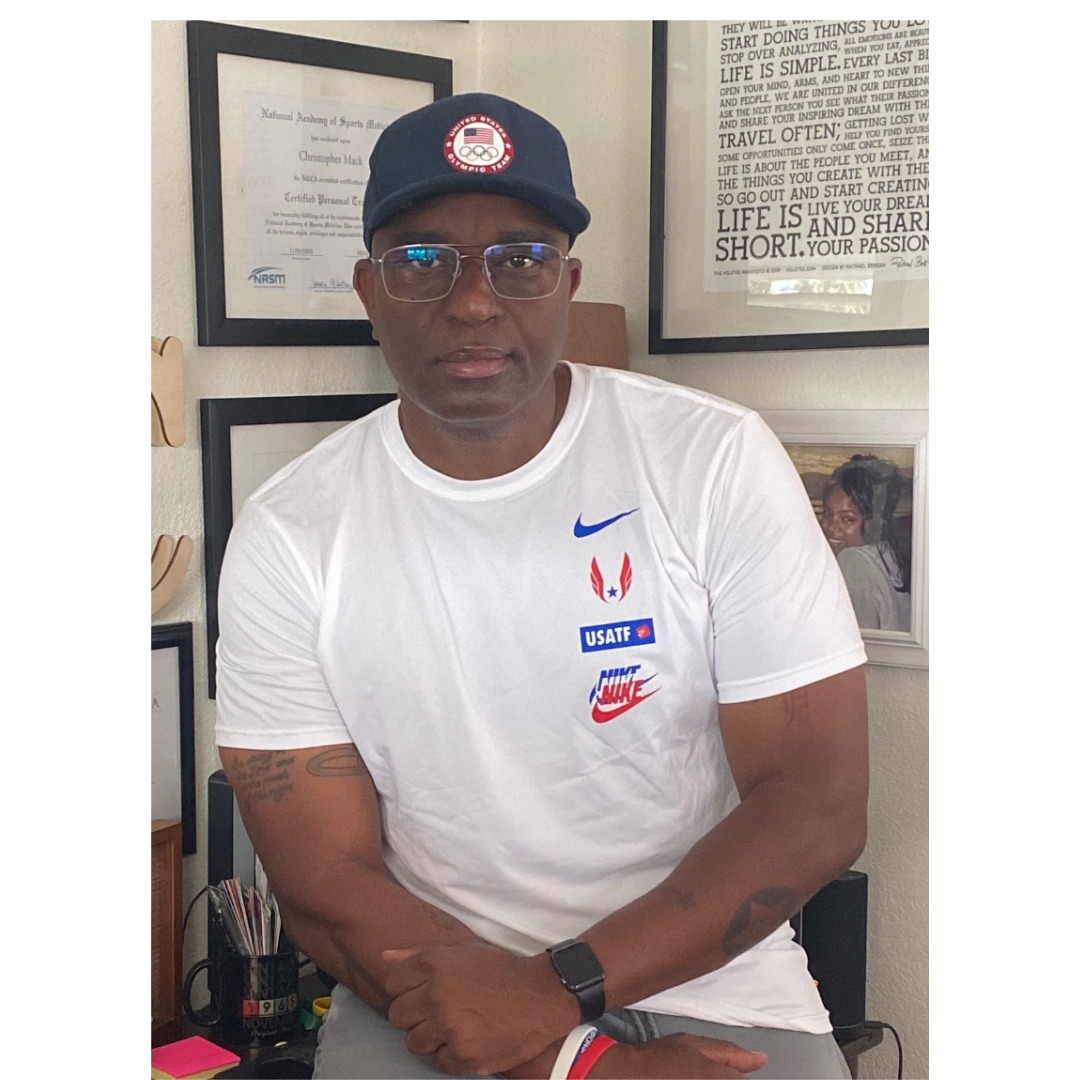 Christopher P. Mack - our new Head Coach of our renowned Track & Field program. Coach Chris is a 33-year veteran head coach of elite track & field programs, such as Cathedral College Prep High School, where he served for the past nine seasons.
His athletes experienced unprecedented success under his tutelage:
● US Olympic team member (2020)
● Won gold, silver and bronze medals at the USATF Junior Olympics, USATF Youth Outdoor Championships
● AAU Junior Olympics and Indoor Championships
● Countless D1 track and field scholarships to USC, UCLA, Houston & Oregon- to name a few.
● Cathedral won their first 2022 CIF Southern Section Div 3 Boys Track & Field Championships.
● Cathedral was also the first team to win three Nike NSAF National Championship Relays at the 2022 Nike NSAF Outdoor Nationals.
Coach Chris has a Bachelor of Science degree in Exercise Science and Kinesiology from Byran University, a USATF Level 3 & World Athletics Level 5 Elite Sprints & Hurdles Coach Certification and a NASM Professional Personal Fitness Trainer & Performance Enhancement Specialist Certification. Coach Chris is also a Lecturer for the LA84 Foundation & USATF Coaching Education programs and a member of the Positive Coaching Alliance.
He has received many accolades and awards such as the Amateur Athlete Foundation (AAF), the KGTV San Diego-10 Leadership Award, the San Diego Hall of Champions Breitbard Athletic Achievement and USATF/Sunny D Pursuit of Excellence Award for his outstanding contributions to youth track and field. We are excited for Chris Mack to join our Serra family while living the Cavalier Code. We believe the Serra Community will benefit from his character and integrity- both as an elite coach and as a mentor of young people. Please join us in giving Coach Chris a warm Serra welcome!

Coach Torres was born in Zacatecas, Me 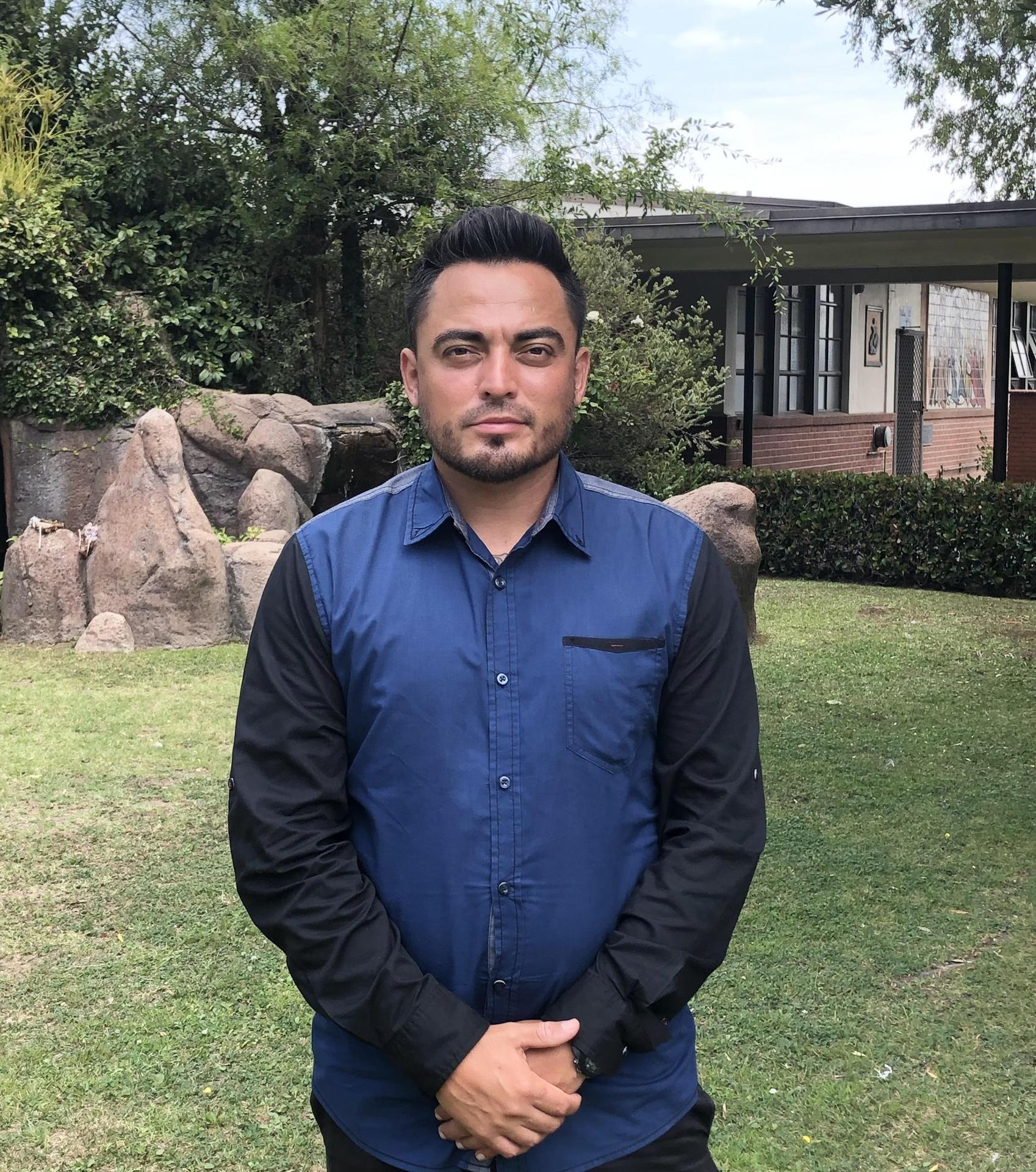 xico, and raised in Southern California. He earned a Bachelor's degree in Digital Media Arts from Cal State University Dominguez Hills and is currently looking into graduate programs for sports management. He is a passionate and motivated coach with more than 28 years of playing experience and 4 years of coaching the sport. He has coached girls' high school soccer for 3 years and 1-year men's soccer at the college level. He recently started a soccer club for boys and girls ages (6 - 14). His background in the game complemented by his dedication to developing student-athletes will be an asset at Serra high school.