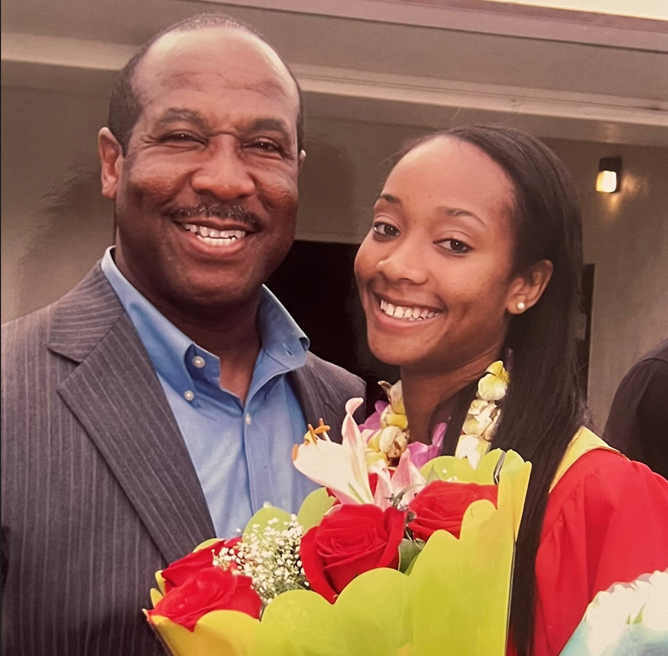 Bria Richardson (class of 2011) is a former women’s basketball student-athlete who earned numerous academic and athletic honors. She was named Daily Breeze Player of the Year, all-CIF, LA Wave, MaxPrep, and Cal-Hi Sports first-team selection, and led the Lady Cavs to their first- and second-ever CIF titles in school history. She was also recognized for her academic success and was named Angie Kretzschmar Female Scholar-Athlete of the Year, President’s Award Silver Seal winner, and West Coast Sports Medicine Foundation Scholar Athlete of Excellence. Bria went on to have both a successful college and professional career at Pepperdine University and ASC Theresianum in Mainz, Germany.

Clarence Richardson was the proud father of Bria and Jason Richardson (class of 2015). You could find him cheering on his son and daughter at every single basketball game. Clarence loved Serra, and even after his children graduated he continued his support of Serra women’s softball, baseball, and football programs. Clarence had an infectious personality and energy, and anyone who was fortunate enough to meet him will never forget him. Clarence passed away in February 2022.

The Bria and Clarence Richardson Scholarship Endowment will support women’s basketball student-athletes who have demonstrated three qualities Bria and Clarence had in abundance: a passion for learning, a love of basketball, and a commitment to helping others. This scholarship will not only honor Clarence’s legacy but it will also provide students with an opportunity to pursue excellence in the classroom while playing the sport they love.