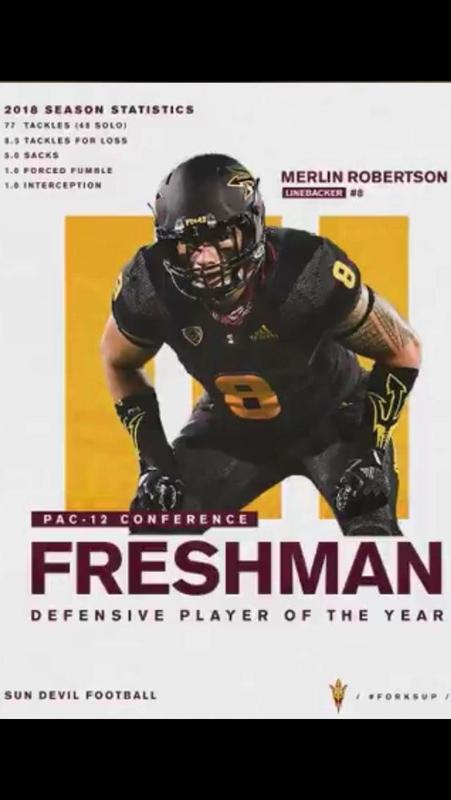 Merlin Robertson Named 2018 Pac-12 Freshman Defensive Player of the Year
The road to success can be a long one. Just ask Merlin Robertson, Serra Class of 2018 alum. After being recruited by a multitude of universities to play football, it was all of a sudden last spring that, then Serra Cavalier Senior, Merlin Robertson was looking for a university where he could thrive. Arizona State University had recently hired former NFL Head Coach, Herman Edwards, to be their head coach. Edwards, who had coached the New York Jets and Kansas City Chiefs, and played in the NFL for the Los Angeles Rams, Atlanta Falcons, and, most notably, the Philadelphia Eagles, has developed a reputation for being a very high-character man. As a Cavalier, this was right up Robertson's alley. When Robertson dominated an All-American game in the late spring of his Senior year, Edwards and the ASU Sun Devils put the heat on its attempts to recruit Robertson, and Robertson committed to ASU.
Robertson in his first year at ASU had a banner year for the Sun Devils and was named the 2018 Pac-12 Freshman Defensive Player of the Year, becoming the third Sun Devil in the school's history to claim the honor. This came as no surprise to ASU Defensive Coordinator, Danny Gonzales. "I think I have preached and preached about how good he's going to be from the beginning," said Gonzales. "The special thing about Merlin is that from Day 1 he wanted to know what everybody does and I think that's an impressive thing for a 17-year old."
Robertson obviously had a solid season, with his game of the year being against the then-Number 15 ranked team in the country, Michigan State. In this game, Robertson recorded nine tackles, 1.5 sacks, a forced fumble and broke up a pass. For his performance, he was named the Walter Camp National Defensive Player of the Week.
Congratulations to Serra Cavalier alum, Class of 2018's Merlin Robertson, 2018 Pac-12 Freshman Defensive Player of the Year. Big things appear to be in store for this Cavalier.
Source: tdrake4sports
Print