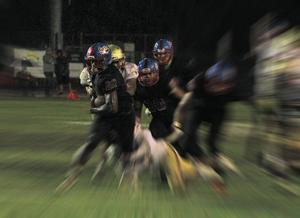 Thunder, Lightning, and Downpours Do Not Put A Damper On A Great Night
The clouds built up and darkened as the afternoon was turning to night. The lights of the stadium at Serra High School shined through the dark and foreboding skies. The lightning began to splinter the early evening sky. The Serra Cavalier Football Squad was ready for its special night. The air turned moist and the rain started to fall. The Homecoming Court, in all of its grandeur, graced the field with style and joy. As the skies continued to darken, the lightning flashed above and the thunder crackled closer, and the Cavalier Cheer Squad and Drumline marched on at full throat. And when the rain began to pour down on the Cavalier faithful, all Cavaliers were firing on all cylinders on, this, the 2018 Homecoming night.
On their way to a 26-15 victory over Alemany, two Cavaliers, in particular had banner evenings. Junior quarterback Doug Brumfield had an incredible night going 20 for 32 with 281 yards passing and 3 touchdown passes, as he artfully eluded Alemany pass rushers all night long. His teammate, running back Jaylon Armstead, had a banner night, shaking defenders for 104 yards rushing on 20 carries and one touchdown and had 156 all-purpose yards. As a unit, the Serra defense may have actually been the player of the game forcing the high-flying Alemany offense into timely turnovers, including three interceptions by highly touted Alemany quarterback, Miller Moss.
At halftime, the rain was coming down, but our Homecoming Court still basked in the glow of a truly beautiful and unique evening, capped by the Cavalier victory. We are Cavaliers. All hail!
Print