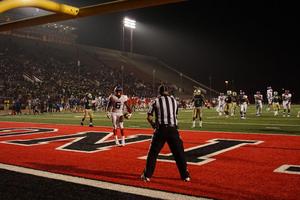 Stovall Scores Winning Touchdown In Cavalier Victory
As our Serra Cavalier Football team readies to play a home game versus Narbonne tonight, thinking about the game versus Long Beach Poly last Friday should serve as inspiration and motivation tonight and for the rest of the season. Our never-say-die Cavaliers looked to be down and out, but anyone who thought the Jackrabbits of Long Beach Poly had the game in-hand had another thing coming.
Serra and Long Beach Poly are schools who have dominated the South Bay during the past 30 or so years as it relates to athletics, both schools having sent multitudes of young men and women off to college to participate as student/athletes. This is the second consecutive year that the squads have faced one another, with last year's game being an incredibly competitive tilt, our Cavaliers racing out to a 24-7 lead and holding on to win a nailbiter, 24-20. This years game would have a different complexion, but the same result.
If games were decided at the end of quarters, our Cavaliers would have one in the "L" column, as the squad faced a 19-0 first-quarter deficit.  A "pick six" led to a quick Poly touchdown and the scoring concluded in the first quarter with a 14-play, 80-yard touchdown drive dominated by a powerful running game that typified the first quarter as both offensive and defensive lines for Poly handled our Cavalier lines, but on this helter-skelter night, the second quarter would be all Serra Cavaliers.
Poly's offense, despite the domination of its line, began to turn the ball over and our Cavaliers were converting turnovers into points, turning three turnovers into 20 second quarter points, and Serra took the lead, 20-19, with 8 seconds left in the first half with a Jailen Mathis 22-yard field goal. From there it would be a back-and-forth affair.
Near the end of the third quarter, a special teams mistake by the Cavaliers gave Poly the ball at the Cavalier 4-yard line, and, soon after, Poly scored the go-ahead touchdown to make the score 25-20. Later, when Poly was pinned in at their own 2-yard line, the punter took a safety rather than risk having his punt blocked, making the score 25-22 with about 4 minutes left in the game.
Two huge plays brought victory to the Cavaliers. On a big 4th and 15, Serra quarterback Doug Brumfield found Ronald Gilliam for a 33 yard gain, and the capper, the winning touchdown pass to Melquan Stovall, gave the Cavaliers a 29-25 lead that they would not relinquish, despite the fact that Poly would get the ball again. A tremendous stand by the Cavalier defense iced the game for Serra. "Defensively, I think those are the real heroes tonight," Serra coach Scott Altenberg said. "I'm proud of the guys." We are proud of our Cavaliers, too! Good luck tonight against Narbonne.
Source: Daily Breeze
Print