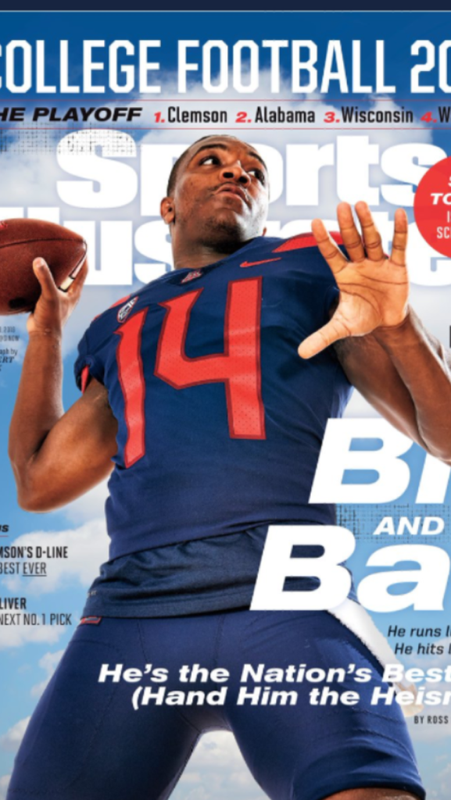 Heisman Candidate and University of Arizona Quarterback, Khalil Tate, Graces The Cover of Sports Illustrated
Our own Khalil Tate has graced a recent cover of Sports Illustrated. For Tate, it has been a long road, with his life being a story of determination and resiliency.
Next man up. This is a common refrain in all team sports. Be ready for your opportunity. Your time could come at any moment. If you are not ready, the opportunity may never present itself again, and the team will suffer due to your lack of readiness. For Serra alum, Khalil Tate '16, this seems to have been his life story- next man up. Last October, this Serra alum parlayed this life approach into one of the most specactular six game runs in the history of college football, and, in the process, catapulted himself into being a 2018 Heisman Trophy candidate. It truly began when Tate was three years old, as he wore his big brother's jersey, attempting to sneak into his brother's tackle football games; however, the Heisman candidate rumbled into the glare of the high school spotlight at Serra High School being given that chance and being ready as that next man up.
Tate as a freshman and sophomore at Serra was relegated to backup quarterback status, and, just when he seemingly was going to get his chance, a 6'5" 225 lb. senior quarterback transferred to Serra, taking the position away from Tate. Undaunted, Tate continued about his business, readying himself to be that next man up. Mid-season that year, Tate got his chance and never looked back. The same has happened where Tate is playing in college, at the University of Arizona. Last year as a Sophomore, Tate was the next man up, as starting quarterback, Brandon Dawkins, suffered an injury. Tate took over and made history, including an all-time single-game rushing record of 327 yards against Colorado on October 7. For Tate, this is sort of old-hat. "I have always been the underdog," said Tate. Underdog, next man up, you can now call Khalil Tate Heisman candidate. We Are Cavaliers. All Hail!
Source: Sports Illustrated
Print