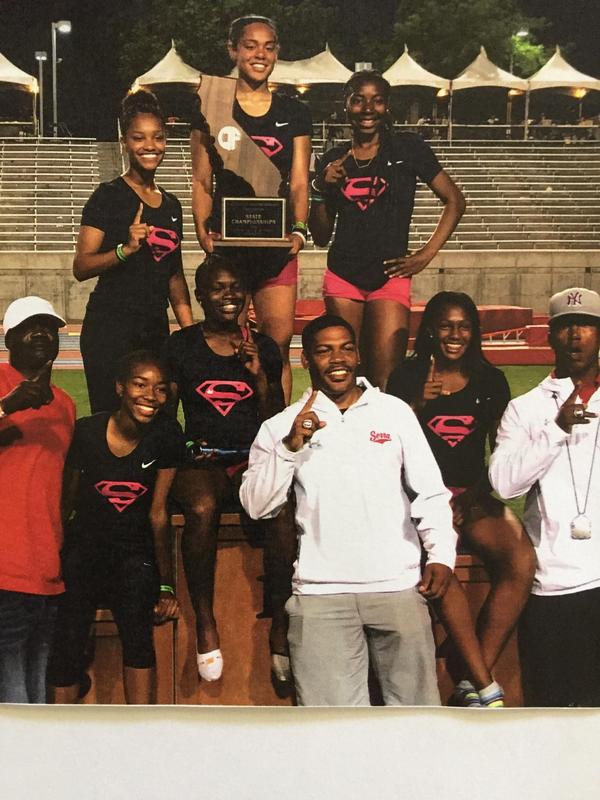 Lady Cavalier Track Squad Captures 2018 CIF State Championship and 4 x 100 Relay Team Captures Second Consecutive State Crown
Every coach of an elite athletic program is interested to see how his or her squad is viewed by others in preseason rankings, even if, as Serra Cavalier Head Coach of Track and Field Christopher Calvin says, your motto is "Never let others' opinion of you become your own!"
When PrepCalTrack published the anxiously awaited 2018 CIF State Girls Track and Field Preseason Team Rankings, the Serra faithful looked at the rankings to see where in the Top 10 its Girls Track and Field team would rank. One problem, though. It was not ranked in the Top 10. This would serve, in part, as an impetus for an incredible season, and cement this school year as the school's most successful year in the 25 years that girls have attended Serra High School.
After winning the CIF Southern Section Division IV Championship in May, the Girls Track squad advanced to the CIF State Finals in Fresno on Saturday, June 3. Competing against squads that were ranked in the PrepCalTrack Preseason  Top 10, the girls were fired up to win and become a part of Serra sports lore.
As she had all year long, Jasmyne Frost led the way contributing 18.5 of the 36 points accumulated by the squad, as Serra totaled 36 points with Oak Ridge finishing second with 33 points. Frost anchored the 4 x 100 team to victory as the relay team won its second consecutive CIF State Championship in the event. Frost also finished 2nd in the 100, 3rd in the 200, and was a part of the 4 x 400 relay team that finished 2nd. The 4 x 400 team clinched the state championship for the squad.  Frost was joined by Queen Okoh, Jaylah Herron, Maya Rush, Kalea Brown, and Destiny Reid in the effort that without any one of these student/athletes may not have had the same result.
To Coach Calvin, the coaching staff, and all of the Track and Field athletes, we applaud your perseverance, hard work, and never-say-die mentality. PrepCalTrack, the 2019 Preseason edition, should be a very interesting read. CIF Champions in Girls Basketball, Softball, and Girls Track and Field. CIF State Champions in Girls Basketball and Girls Track and Field. An unbelievable year for Serra Lady Cavalier athletes. We are Cavaliers. All hail!
Print