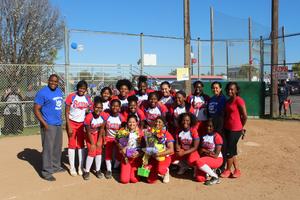 Serra Cavalier Softball Squad Wins CIF Division VII Southern Section Softball Crown
On Saturday, June 3, the Serra Lady Cavalier Softball Squad completed an amazing season, winning the school's first CIF Southern Section Championship for Softball, defeating the Archer School for Girls, 12-1. The victory culminated an unprecedented level of success that realized the potential of a program on the rise for the past couple of seasons. The championship triumph also completed a run of dominance rarely seen in Cavalier lore. The squad never really had a close game during its entire championship run.
In the first round, the squad defeated Excelsior Charter, 14-3. Next up for the Lady Cavaliers was Mesa Grande Academy. The squad took a long trip out to Calimesa to take on Mesa, and then throttled the Calimesa school, 17-0. In the Quarterfinals, the Lady Cavaliers took on Campbell Hall in North Hollywood. Cavalier bats were connecting once again, and the Vikings of Campbell Hall were no match for Serra as the squad triumphed, 13-4. On to the Semifinals our Lady Cavaliers were, and what an exciting day it was as Serra was the site for this matchup. After a tight start, Serra pulled away in the 5th inning and never looked back, defeating Marymount, 10-3. This set up a CIF Championship matchup against the #2 seeded Archer School for Girls. The game was never close as by the 3rd inning the squad was up, 7-1, with the final score being Serra 12, Archer School for Girls 1.
Congratulations to a squad that won a lot of games, but also cared about each other, took care of each other, and put the Cavalier Code on display every day they practiced or played. The Serra community is so proud of you.
Print