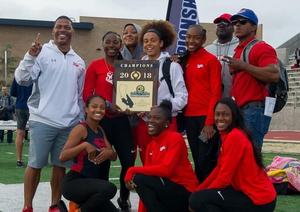 Sprinters Dominate and Field Star Sets School Record Keying Championship
In what could be called a dominating performance, the Junipero Serra Cavalier Girls Track and Field squad claimed another CIF Southern Section Championship for the school on Saturday, May 19. This championship could  be a stepping stone to greater heights, as the team prepares for the Masters Meet on Saturday, May 26 and the CIF State Finals the following weekend.
The sprint squad of Jazmyne Frost, Queen Okoh, Jaylah Herron, Destinee Reid, and Maya Rush took on all comers and throttled the competition. Leading the way was Frost, a junior, who won both the 100 and the 200 in times of 11.59 and 23.70 respectively. Frost was also a part of a quartet that included Okoh, Herron, and Reid that won the 4 x 100 relay, blazing past the competition in a lightning fast time of 46.19. Frost, unbelievably, was also a part of the 4 x 400 team that included Okoh, Rush and Herron, kicking it in at a blistering pace, finishing second in the meet clocking in at 3:46.89. Additionally, Okoh completed a special day for herself, finishing second in the 100 to her teammate Frost with a time of 11.97.
In the Field events, Erin Brown, a junior, led the way for Serra. In record-breaking style, Brown set a new record at Serra for Girls in the Discus, slinging it 125 feet, 2 inches, winning the CIF Championship in the event. She also finished third in the Shotput.
Next up for this incredible squad is the Masters event at El Camino College and the CIF State Championship Meet. Coach Christopher Calvin is ready to take his squad even higher after the CIF Championship win on Saturday. "We executed in every phase today," said Coach Calvin. "It was awesome to see. This is one of two goals that we set out at the beginning of the season and to see it come to fruition, it's all of them. We're working on Masters already, scheming up what we have to correct and get fixed and then it is on to state."
Congratulations to this special squad, and it's on to Masters and State!
Source: Daily Breeze
Print