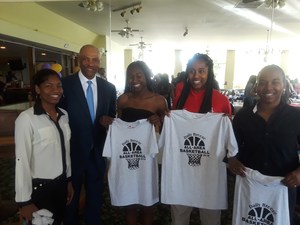 Lady Cav Cagers Givens, Duru, Tucker, and Pointer Dominate Daily Breeze All-Area Girls Basketball Team Selections
This past Wednesday, April 18, a luncheon put on by the South Bay Athletic Club (SBAC) was held at the Redondo Beach Elks Lodge to honor the Daily Breeze All-Area Boys and Girls Basketball Teams. Many schools had players represented, but no school's Girls Basketball squad was better represented than the Serra Lady Cavaliers, who had four players selected to the All-Area Team.
Selected to the first team, representing Serra, were Junior guard/forward Alexis Tucker and Senior guard Cheyenne Givens. Selected to the second team were Senior guard/forward Lauryn Pointer and Senior guard Rachel Duru. This event brings culmination to an unforgettable season for the Lady Cavaliers, in which Serra won the 2017-2018 California Division I Championship and finished as a top 15 team in the country, as ranked by maxpreps.com.
Congratulations on being honored as being the very best in the area.
Print