Serra Superstar Returns to Serra to Give Back 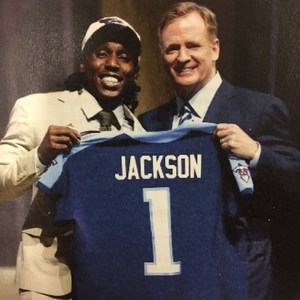 Adoree Jackson Pays a Visit to Serra Football Camp
On Sundays in the Fall and early Winter, turn on the television set to Fox, CBS, or NBC, and you will be watching an NFL football game, and if you are watching NFL football, you will likely see a Serra alum. One Serra alum who has ascended to the NFL, a defensive back and return specialist for the Tennessee Titans, is Adoree Jackson. At Serra, Jackson was not only an All-American in football and track, but he was an excellent student at Serra. Upon his leaving Serra, Jackson attended and played football at USC, and left quite an impression at USC, completing his career at USC as one of the greatest defensive backs in the history of USC football. He was a first-round NFL draft pick, selected 18th by the Tennessee Titans. Many with this type of resume forget where they come from. This is not true of this very special guy.
On Monday, March 19th, Serra Head Football Coach, Scott Altenberg continued with his weekly and well-known youth football camp. In walked Adoree Jackson. The buzz was palpable. "To be able to come and give back, it is always a blessing," Jackson said. "Growing up, I didn't go to many camps. I didn't get to see somebody that I looked up to that I had known locally and that was playing at the next level.  For me it is one of those things just to always give back. When I was a kid, that's what I would have wanted, so any time I can give back and get back here (Serra), it is always cool. This place will always be special."
Jackson spent a large chunk of time, over two hours, with the campers, providing his expertise about how to play the defensive back position to the very eager-to-learn campers. One person who was very happy and proud to have Jackson was his high school coach, Serra Head Football Coach, Scott Altenberg. "It just speaks to what we're about at Serra," Coach Altenberg said. "We talk about being a close-knit group, and having these guys come back just to be able to spread the word of it."
We wish Adoree Jackson all of God's blessings as he moves forward in what looks to be an incredibly promising NFL career.
Source: Daily Breeze
Print