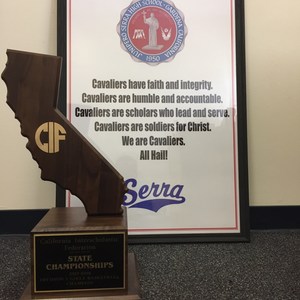 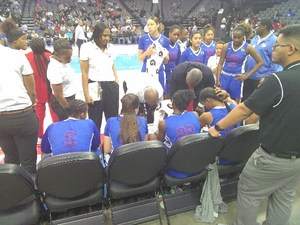 Serra Girls Basketball Defeats Sacred Heart Cathedral San Francisco to Capture State Crown
February 28, 2018. Bishop Montgomery gymnasium. Open Division Girls Basketball Playoffs. There were only seconds remaining. Our Lady Cavs had the final possession. With one second left, our Serra Lady Cavs got what looked to be the last shot with the game tied at 60. The shot looked good. It was true. It practically ripped the net, just after the buzzer sounded. Wet, as the kids like to say. It happened. We beat our rival, Bishop Montgomery in their gym. We silenced the raucous home fans...Hold it. The refs needed to talk it over.
Turned out that despite photo and video evidence to the contrary, the refs overturned the made basket, saying that the shot did not get off in time, and the game remained tied and was sent to overtime. Bishop Montgomery ended up winning the game, with the controversial ending of regulation, 71-68 in an overtime thriller. However, the season was not over for our Lady Cavs. They would move on to the CIF Division I State Playoffs with one thing in mind: redemption.
Our resilient and poised Lady Cavs, a reflection of their masterful leader, Head Coach McKinsey Hadley, began their march to a State Championship on March 7 with a dominating 72-41 win over Eagle Rock High School. Next up for the Lady Cavs was Bishop Alemany on March 10. In a more competitive contest, the Lady Cavs pulled away in the end and won 64-54. Sierra Canyon was next up in the Southern California Regional Semifinal on March 13. After a tightly contested first half, the Lady Cavs played one of their best quarters of the season, outscoring Sierra Canyon 24-8, and cruised to victory 72-62. On March 17, in the Southern California Regional Final at the Walter Pyramid at Cal State Long Beach, our Lady Cavs dominated the first three quarters of play and defeated Ribet Academy 58-46.  It was on to Sacramento's Golden 1 Center and the Division I CIF State Championship Game. The Lady Cavs would face the storied program of Sacred Heart Cathedral's Fightin' Irish of San Francisco on March 23. The luck of the Irish would be of no help to Sacred Heart Cathedral on this day, as our Lady Cavs sought with all of their might that redemptive conclusion to a hard-fought season.
Cheered on by the Serra faithful who made the nearly 400 mile trip on a rooter bus earlier in the day, our Lady Cavs completely throttled the Fightin' Irish in the first quarter, racing out to a 19-4 lead at the end of the first quarter. Other than a brief third quarter comeback by the Irish, the outcome of the game was never in question. The Lady Cavs won the game 70-54. It was a total team effort, but standouts were Senior Cheyenne Givens, who scored 20 points, and Junior Alexis Tucker, who scored 19 points. A huge contributor to the win was Ivori Scott, who provided that post presence and rim protection and rebounding that does not always show up on the stat sheet, but intangibly paid huge dividends for our Lady Cavs.
The Lady Cavs finish the season as the #5 team overall in California and #15 in the country (maxpreps.com) and of course 2017-2018 CIF Division I California State Champions. The trophy is the result of the tremendous talent, effort and work that our Lady Cavs have given this year and every year, but it also represents the spirit with which our ladies work. Congratulations Lady Cavs! You will be remembered forever at Serra for having one of the greatest seasons a Serra squad has ever had.
Print