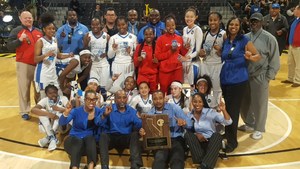 Lady Cavs Head to Sacramento for a Shot at a State Championship
On Saturday, March 17, our Lady Cavaliers moved within one step of winning a Division I State Championship after defeating Ribet Academy 58-46, winning the Division I Southern California Regional Championship at the Walter Pyramid at Cal State Long Beach. The Lady Cavs dominated play for most of the game, but had to survive a furious run by the Fighting Frogs of Ribet at the beginning of the 4th quarter before pulling away for the Regional Championship win and a trip to Sacramento.
The win means the Lady Cavs will be playing for the Division I State Championship Crown, facing perennial Northern California power, Sacred Heart Cathedral Preparatory of San Francisco, on Friday, March 23 at 6 pm at the Golden 1 Center in Sacramento. This is the third state championship appearance for the Lady Cavs, and if our Lady Cavs are able to pull off the victory on Friday, this would our second state championship. The game will be broadcast on SportsNet LA. Check with your satellite or cable provider to find out which channel the game will appear on.
Congratulations, Lady Cavs, and all the best in Sacramento.
Print