National Signing Day a Big One at Serra 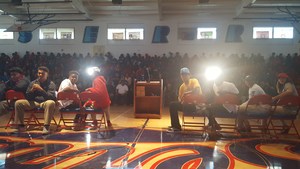 Eight Cavalier Student/Athletes Announce Their College Destinations
During a very emotional afternoon, eight Serra Cavaliers let the Serra community and the nation know the path of their dreams this past Wednesday, February 7. Most of the announcements were no surprise, but there was some suspense for at least one Serra Cavalier and the path that he would take.
Colby Wilson, a standout Girls' Soccer player at Serra, announced that she would play Women's Soccer at Eastern Washington. She was introduced by the Serra High School Girls' Soccer Head Coach, Mr. Sergio Gutierrez. "This is my first girl to receive a Division I scholarship at Serra, and I am so proud of her," said Coach Gutierrez. The athletic and versatile Wilson is looking to make a strong impression for the Eagles of Eastern Washington.
Girls' Basketball has been a strong-suit for Serra High School during the past decade, led by Coach McKinsey Hadley. He had the honor of introducing Lauryn Pointer, who decided to accept a scholarship to study and play Women's Basketball at UC Riverside. "Lauryn has been a huge part of our program the entire time that she has been here," said Coach Hadley. There is no doubt that Pointer will make a huge impact as a UC Riverside Highlander in all that she does.
Serra High School Head Football Coach Scott Altenberg announced the destinations of, count 'em, six Cavalier student/athletes who played for him this past season. In an emotional presentation, Coach Altenberg let the Cavalier faithful know that John Jackson would be moving on to USC, Vatulele Finau to California State University San Luis Obispo, Kobe Smith to San Diego State University, David Eure to the Air Force Academy, and Bryan Addison to UCLA. The festivities began with the most anticipated decision. Where would Merlin Robertson decide to go? In the end, his decision was between the University of Illinois and Arizona State University. Waiting until the final day to decide, Robertson chose Arizona State University. All six of these young men earned full scholarships from their respective schools and will be great student/athletes.
It was truly an incredible day for all. We, the Serra community, wish all of our Serra Cavalier student/athletes all of God's blessings.
Print