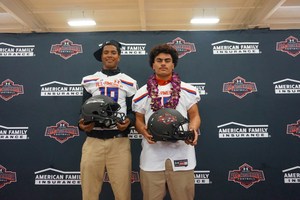 Robertson Captain in Under Armour Bowl; Addison Plays For More Than a "W" In Polynesian Bowl
If you have followed the Serra Cavalier football program for the past four years, you most certainly know who Merlin Robertson and Bryan Addison are.
Robertson has dominated play on the defensive side for the Cavaliers since he arrived upon the Serra campus, and he has received numerous scholarship offers from elite Division I programs to play NCAA Football. His career at Serra concluded this past month by being selected to play in two All-American bowl games, the Under Armour Bowl and the Polynesian Bowl. For the Under Armour Bowl, Robertson was named a captain, a tremendous honor, and Robertson performed well in the game. For both games, he was joined by Cavalier teammate, Bryan Addison. Addison has starred at Serra at both wide receiver and defensive back, and the accolades for Addison have snowballed as 2017 has turned to 2018. Addison was named the #1 high school athlete for 2017 by 24/7 Sports Composite Rankings. He is now preparing for the next challenge, as he will be playing college football at UCLA on a full athletic scholarship.  For Addison, playing in the Polynesian Bowl took on more significance than most other games.
The Polynesian Bowl, played at Aloha Stadium in Oahu, Hawaii, was a homecoming of sorts for Addison. Addison's parents, father Bryan Addison, Sr. and mother Faye Kapikookalani Meyer Addison had deep ties to Hawaii, his father having played for the University of Hawaii, and his mother being a native of Hawaii and having attended the Kamehameha School. What made this a particularly poignant return for Addison is that his mom passed away in 2002 when Addison was still a very small child. For Addison, the experience was an emotional one as he was able to visit the Kamehameha Chapel on the Kamehameha campus, site of the service for his mother and where he practiced for the game in Hawaii. "I know she is watching from above, so just having a guardian angel watching me practice where she has been, I feel kind of closer as well," said Addison of the experience. For Addison, this is a fitting conclusion to a high school playing career that has come full circle, back to where it all began, to the Land of Aloha.
We wish these young men and all Serra student athletes who played in the Fall and are graduating seniors the very best and all of God's blessings.
Source: Some content taken from Polynesian Bowl website
Print