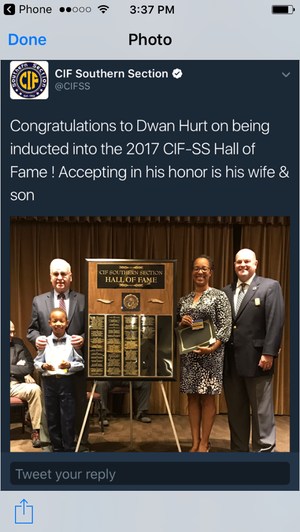 CIF Southern Section Inducts Coach Dwan Hurt into Its Hall of Fame
On Wednesday, October 18, in Los Alamitos, at the Headquarters of the CIF Southern Section, officials for the CIF Southern Section inducted its Class of 2017 Hall of Famers. Amongst the inductees was one of Serra's own, the recently passed Coach Dwan Hurt. He was represented at the ceremony by his wife, Rayvon, and his son, Isaiah. Coach Hurt's induction was richly deserved, both because of his achievements on the court and also because of the seemingly countless lives that he touched in his 28 years as a coach, teacher and Dean of Students.
Coach Hurt was a true "Serra Man", an alum, Class of 1981. As a result of his being an outstanding athlete, he was, after an extremely successful stint playing basketball at El Camino College, awarded a basketball scholarship at Gonzaga University and was an outstanding player there.
Maria Regina Catholic School in Gardena, just up the road from Serra, was where Coach Hurt began his career in education as a P.E. teacher and Volleyball Coach. While at Maria Regina, Coach Hurt felt the pull of Serra, and, in 1987, he returned to Serra as a religion teacher and as an assistant basketball coach, working for his high school coach and mentor, George McDaniel.
In 1989, Coach Hurt got the call to be the Head Coach of the Serra Cavaliers Boys Basketball program, and it was "Siempre Adelante" ("always forward") from there. In just four years, Coach Hurt transformed Serra basketball into a perennial power, with Serra reaching the CIF Southern Section Championship game in 1992, and one year later winning both the CIF Southern Section and State Championship games. Coach Hurt's career record is more than Hall of Fame worthy. During his 28-year tenure as Head Coach, Coach Hurt led the Cavalier Basketball squads to 544 wins, eight CIF Southern Section Championships (1993, 1999, 2000, 2006, 2010, 2012, 2013, and 2016), two CIF State Championships (1993 and 2010), and was named California Boys Basketball Coach of the year twice (1993 and 2010).
Even more significant than the accolades that Coach Hurt has received, the induction into the Hall at the CIF being the latest, is the impact that Coach Hurt has had on thousands of students and athletes that he mentored over his 28-year career at Serra. He took very seriously the message often given by Father Bertrand Clemons, then Principal when Coach Hurt attended Serra, that "Men of Serra are Serra Men." The men and women under Coach Hurt's tutelage would say so, and all of them and all of us are so proud that our friend, Dean, teacher, and Coach, Mr. Dwan Hurt , is a CIF Southern Section Hall of Famer. God Bless you, Coach. We will always love you. We miss you. We will never forget you.
Print