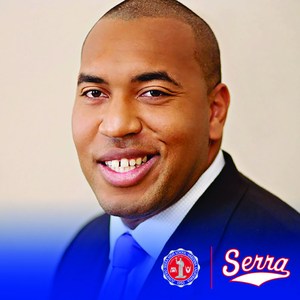 Junipero Serra High School Selects Austin Jackson ‘01 as Full-Time Dean of Students
--
Junipero Serra High School announced in December 2016 that Austin Jackson '01 was named interim dean of students following the unexpected passing of longtime dean, Dwan Hurt '81. Principal Jeff Guzman is pleased to announce the interim tagged has been removed and that Jackson has officially been tabbed as Serra's full-time dean.
"Following very difficulty circumstances, we were confident Mr. Jackson was going to carry out his duties of interim dean and he has done just that. Mr. Jackson knows exactly what it means to be a Cavalier based on his many important roles of alumnus, teacher, assistant athletic director and coach. He has done a phenomenal job this year and we are very excited for the continuous and positive impact Mr. Jackson will have on our students and Serra Family," said Guzman.
Jackson commented, "I am thankful to Mr. Guzman and our administration for this opportunity. Serra is a special place for so many reasons and I am proud I get to play a small part in our students' success."
Print