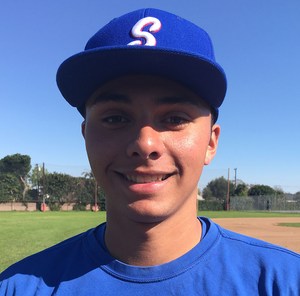 Senior CJ Fernandezees Recognized by Gardena Police Foundation for Leadership
--
Junipero Serra High School's Cardinal (CJ) Fernandezees has been selected as a recipient of the 2017 Gardena Police Foundation College Scholarship. The maximum amount of the award is $4,000 spread out over four years. Fernandezees was recognized for how he demonstrates leadership and teamwork both in and out of school settings.
Fernandezees is not your typical leader in the sense of being vocal and upfront. The Cavalier chooses to lead by his actions, and his actions speak volumes.
Fernandezees boasts a 4.4 grade point average (GPA) earning Principal's Honor Roll status all four years at Serra. He has volunteered his time with organizations like the Special Olympics, Midnight Mission and a local elementary school. Fernandezees is a four-year starter on Serra's varsity baseball team where he has earned all-league honors, and will attend Loyola Marymount University in the fall on a partial athletic and academic scholarship.
Cavaliers are called to lead and serve, and Fernandezees comments that Serra has made a big impact on his growth as a person, student and student-athlete.
"Here at Serra, I've been given all of the tools I need to be successful, and leadership to me is about how you positively influence others," said Fernandezees.
Serra's instructors have taken notice of Fernandezees because of how he conducts himself.
English teacher, Andra Anton, taught Fernandezees in Serra's toughest English course, Advanced Placement (AP) Literature.
"What impressed me about CJ is how well-rounded he is. First off, he's a really good writer who takes creative risks, and he's hardworking, ambitious, consistent, and kind. He does what he's supposed to do, and by every measure, he is a true Cavalier by his integrity, humility, and accountability," said Anton.
"CJ is a focused young man, leads by example, never quits and that is why others gravitate towards him," commented Martel London, Serra's second-year head baseball coach. "He unfortunately experienced an arm injury during his junior year that would have discouraged many, but not CJ. He's working harder than ever, has come back stronger than ever and is going to play a big role in our success this year."
McKinsey Hadley, a longtime math teacher and highly successful girls basketball coach at Serra, knows a thing or two about molding and mentoring high-performing young people. Hadley reflected, "CJ is a good teammate in every sense of the word: in the classroom, on the baseball field and in the community. He's always willing to lend a helping hand to other students. His leadership style is quiet, but highly effective."
Fernandezees was a student in Hadley's Algebra II course earlier in his high school career.
Fernandezees and other scholarship recipients will be honored at an award luncheon at the City of Gardena's GTrans Center on April 6, 2017. Recipients of the police foundation's scholarship are required to maintain a 3.0 GPA in college and be enrolled as a full-time student.
Print