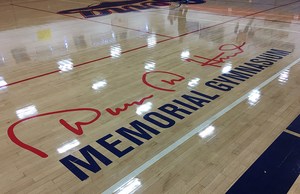 Junipero Serra High School Honors Deceased Head Basketball Coach, Dwan Hurt '81, With Renaming of School Gymnasium
--
Junipero Serra High School has honored former legendary head boys basketball coach, Dwan Hurt ‘81, with the renaming of its gymnasium to the Dwan D. Hurt Memorial Gymnasium. Hurt, who was an alumnus of the school as well as a longtime dean and basketball coach, passed away unexpectedly after Thanksgiving. Hurt was 53 years-old.
The announcement was first made at Hurt’s funeral at St. Catherine Labouré Catholic Church in Torrance by former Serra principal and current superintendent of high schools for the Archdiocese of Los Angeles, Monsignor Sabato Pilato. The announcement drew a rousing ovation from attendees in the standing-room only crowd.
“Dwan simply made a positive impact on people, and he certainly did on me during my three years as principal,” Said Jeff Guzman. “We talk about what it means to be part of the Serra family, and what it means to be a Serra Cavalier. He was a fabric of our school for nearly 30 years. I will miss him, and he will be sorely missed.”
Hurt did indeed make an impact both on and off the court. On the court, his accomplishments were lengthy and impressive. Hurt was the headman for two state championships, eight C.I.F. championships plus numerous other accomplishments. He presence was also felt off the court. As dean, Hurt was a mentor, father figure and a role model to thousands of Cavaliers.
Nadi Wissa, Serra’s assistant principal, worked closely with Hurt for close to 10 years. The two were jointly responsible for student-related and disciplinary matters. “Dwan was special for many reasons, but what stood out to me was he was a great listener to everyone: students, parents, faculty, players—you name it. He had a unique gift to make people feel welcomed, and he was comfortable to talk to.”
Hurt left a legacy at Serra, and as a result, his name will be etched in wood for the rest of time.
Print