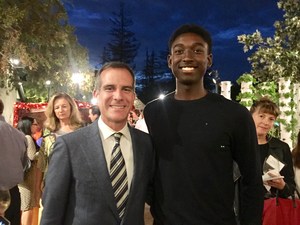 Senior Kolby Warfield's Leadership Continues to Grow in L.A. Mayor Eric Garcetti’s Youth Council
--
Remember the name Kolby Warfield. Warfield, a multi-talented senior at Junipero Serra High School, has a bright future ahead of him, and influential political figures like Los Angeles mayor, Eric Garcetti, are already taking notice. Warfield, a senior at Serra, has been selected to a one-year fellowship as part of Mayor Garcetti’s Youth Council. Warfield was tabbed with other Los Angeles-area high school students to hone their leadership skills in the areas of political and civic engagement, and community volunteerism.
Warfield has very much enjoyed his time with community leaders and with the mayor. “I was so impressed by Mayor Garcetti. In a short period of time, you can tell he invests in personal relationships and how that plays a role in his political work. He took time to make sure he knew my name, and that’s something that stuck with me,” reflected Warfield.
Warfield is developing leadership qualities of his own and cites staff on Serra’s campus like Honor’s Geometry teacher, Robert Duffy, for playing a large role during his high school experience. “Kolby in my mind is one of those students that you know will be successful in whatever he chooses. He is no doubt going to experience individual success, but he’s going to use that platform to serve others,” said Duffy.
Warfield is an A-student student at Serra, has served as a student ambassador, and has been a part of the boys basketball championship-winning program since his freshmen year. He hopes to attend California State University, San Luis Obispo and study biomedical engineering.
The Serra Cavalier has developed big aspirations during his young life. “I hope to invent a medical device or prosthetics to extend the life span for the elderly and to increase their quality of life,” commented Warfield.
Serra’s principal Jeff Guzman was asked about what he thought about Warfield’s accomplishments and he responded, “I think it’s fantastic! Here at Serra we encourage and motivate our students to lead, to serve, to be scholars and be accountable, both individually and in our communities. We call it the Cavalier Code. Kolby is one of many shining examples and we’re extremely proud of him.”
Warfield was also recently invited to the mayor’s home by the Getty Foundation because of his involvement and graduation from the Civic Youth Leadership Academy, a program developed by the City of Los Angeles to empower the next generation of civic leaders.
Print