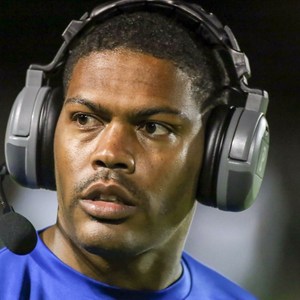 Junipero Serra High School Names Chris Calvin '06 New Head Track & Field Coach
--
Junipero Serra High School athletic director, Joshua Dabbs, has announced that Chris Calvin ‘06 has been named the Cavaliers’ head track and field coach. Calvin is a familiar and respected face around the Serra community. The alumnus is not only a popular math and science instructor, but also plays a large roll in Serra’s football program. In addition to overseeing Serra’s talented wide receiving corp and special teams, Calvin directs Serra’s strength and conditioning program using the latest techniques and strategies to help student-athletes get faster and stronger.
“I’m excited to see the impact Coach Calvin will make on our track and field student-athletes because he has already done in so many different ways around campus. He has a unique ability to connect with, communicate to, and motivate young people. As both a track and student-athlete himself here at Serra before running at Fresno State, he knows first-hand our rich tradition. It’s going to be fun to watch,” said Dabbs.
Calvin relinquished his assistant athletic director duties to make room for his new track and field responsibilities.
Serra indeed has a rich tradition across the entire athletic program, but in particular track and field. Since 1950, Serra has won three state titles, four state runner-up titles, 20 boys CIF championships, five girls CIF championships, 17 boys league titles, and five girls league titles:
“One of my favorite saying is 'Empty the Bucket,'" commented Calvin. “And that’s what we’re going to do! Students come to Serra because we’re the Home of Champions in the classroom, in our faith, on the track, and in the community. I’m going to do everything in my power to coach Cavaliers to live up to our motto.”
Print