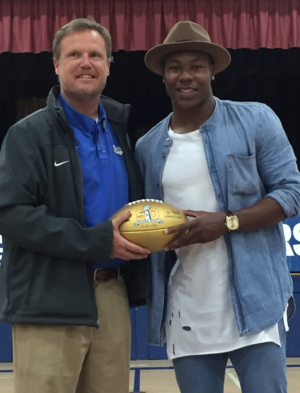 National Football League honors Junipero Serra High School, two alumni for Super Bowl success
--
The National Football League (NFL) has honored Junipero Serra High School and two alumni, Deon Figures ‘88 and Duke Ihenacho ‘07, as part of its Super Bowl High School Honor Roll. In celebration of this year’s 50th Super Bowl, the NFL is recognizing its players and the communities in which they came from.
Serra has received two specially-designed commemorative golden footballs for Figures and Ihenacho’s participation in Super Bowl XXX and and Super Bowl XLVIII respectively.
Athletic Director Josh Dabbs is thrilled to be associated with such prestigious honors. Dabbs reflected, “Serra has a fantastic tradition and it’s a blessing to not only receive one golden football, but two. It’s a testament to our community and to the hard work of our student-athletes and coaches.”
Figures starred at the University of Colorado as an All-American before playing for the Pittsburgh Steelers and the Jacksonville Jaguars for a combined six seasons. In 1993, Figures was a first-round pick for the Steelers.
Ihenacho played at San Jose State University. The safety competed for the Denver Broncos before signing with the Washington Redskins.
According to the NFL, more than 2,000 schools and 3,000 individuals will be honored through the program.
Print