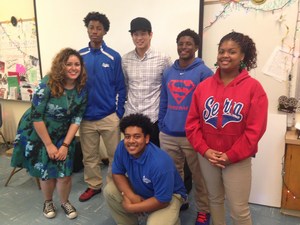 Actor Ki Hong Lee of ‘Maze Runner’ movie series shares experiences with Junipero Serra High School students
--
Actor Ki Hong Lee, most notably known for his role as Minho in the popular movie series Maze Runner, visited Junipero Serra High School to share career and life experiences with Cavalier students. Lee was accompanied by his wife, Hayoung.
The on campus event was coordinated by Serra’s drama instructor, Adriana Encelan. Encelan is an alumna of Serra and is one of many former students that have returned to teach at Serra. During her time as a student, Encelan’s passion for acting grew leaps and bounds during her high school years and she feels compelled to pass along that passion to the next generation of actors.
“Ki Hong has experienced a great deal of success as an actor, but it has not been easy for him. I felt this was a great opportunity to show our students what it really takes to be successful, and what it takes to hone their crafts as actors,” said Encelan.
Serra students were thoroughly engaged during their time with Lee as evidenced by a 30-minute question and answer session with the actor. Afterwards, Lee posed for photos with students and administrators.
Lee is a graduate of the University of California, Berkeley which is where his love for acting took off. The South Korean-born actor lived in New Zealand before making his way to the United States.
Lee's unconventional route to Hollywood has been guided by perseverance and staying true to himself.
The multi-talented Lee is also a writer and producer. Lee's breadth of experience includes film, short film, television and stage work. In addition to starring in Maze Runner, Lee has made appearances in the Netflix series Unbreakable Kimmy Schmidt, and on shows like NCIS, Blue Bloods and many others.
Print