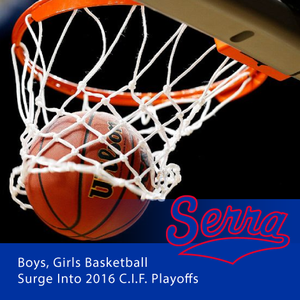 Boys, Girls basketball surge into 2016 C.I.F. playoffs
--
Junipero Serra High School’s basketball programs are no strangers to competing in the CIF-Southern Section playoffs, and 2016 will prove to be no different. Once again, both the boys and girls squads have qualified for postseason play.
Led by head coach Dwan Hurt ‘81, the boys varsity basketball team, tied for second in the highly competitive Del Rey League, competes in the 4AA bracket and hosts the De Anza League’s No. 3 team, Desert Hot Springs, tomorrow, Wednesday, February 17 at a 7:00 p.m. in Serra’s gymnasium. Doors open at 5:30 p.m. Tickets are $10 for adults and students without school identification, and $5 for students with school identification. Refreshments will be available for sale.
The winner of Serra-Desert Hot Springs faces the winner of Buckley-Nipomo in the second round on Friday, February 19 at 7:00 p.m.
On Saturday, February 20, Serra's girls varsity basketball team (19-7, 7-0, Del Rey League 1) travels to Los Angeles to face a scrappy Windward team. This CIF Open Division match-up features two of the state’s best according to MaxPreps. The Wildcats (18-5, 8-0, Gold Coast League 1) are ranked No. 13 in California while the Cavaliers come in at No. 16.
The ‘Lady Cavaliers’ started off the season hot going 6-0 and finished even stronger winning their last 10 games in a row.
Head coach McKinsey Hadley is very excited for what lies ahead as he feels confident about his group. “At Serra, we relish competing in Open Division-type scenarios because our players face pressure-packed schedules year-in and year-out. It’s going to be fun; we gravitate towards competitive opportunities like this,” said the veteran coach.
Hadley also has a reason to like his team’s chances. Serra topped Windward 63-61 earlier in the season at the Redondo ‘Battle at the Beach’ Tournament.
The winner of Serra-Windward faces the winner of Harvard-Westlake-Vista Murrieta in a quarterfinal contest on Wednesday, February 24 at 7:00 p.m.
[+ More News]
Serra’s girls basketball team came out strong from the start of Tuesday night’s Del Rey League contest against Bishop Montgomery, using a half-court trap that gave the Knights fits and allowed it to take command early. The Cavaliers never relinquished the lead en route to an 83-51 victory.
With the win, Serra (18-7, 7-0) clinched at least a share of the Del Rey League title, with Thursday’s game against second-place St. Anthony the only hurdle for the Cavaliers before clinching the title outright.
[+ Read More | View Video]
The Serra boys basketball team saw its playoff lives flashing before its eyes as it watched Del Rey League rival Cathedral outscore the Cavaliers by 14 points in the second quarter to take a 16-point lead into the locker room at halftime.
Serra coach Dwan Hurt knew if something didn’t change quickly, his Cavaliers were going to be watching the playoffs from their sofas.
So Hurt pulled out a tenacious full-court pressure defense to start the third quarter, and Serra outscored the Phantoms 31-8 in the quarter to take control of the game as Serra rallied for an improbable 83-72 victory, which puts the Cavaliers on the verge of a CIF-SS playoff berth pending the result of Thursday night’s Cathedral-St.Bernard game.
[+ Read More]
Print