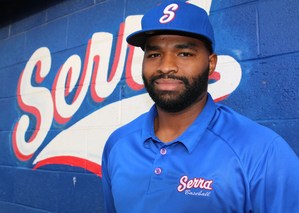 Cavaliers to feature fundamental, aggressive style of play
--
Junipero Serra High School Athletic Director, Joshua Dabbs, has announced that Martel London has been named the Cavaliers’ next head baseball coach. London, a Texas Southern University and Inglewood High School alumnus, is a familiar face to the Serra community. London, who also has deep ties within the Southern California baseball community, was a member of Serra’s coaching staff during the 2013 CIF-SS championship run. During this historic time, London was responsible for instructing Cavalier hitters on offense and outfielders on defense.
Principal Jeff Guzman is thrilled with the selection. Guzman commented, “At Serra, our students and community live by high standards called the Cavalier Code. This code covers faith, integrity, humbleness, accountability, scholarship, leadership and service. What’s great about London is he embodies this philosophy in how he lives his life.”
After playing in college and competing for the El Paso Diablos in the independent leagues, London is excited to use his experience to better the next generation of baseball players. “I’ve been molding and growing the skills and talents of players for a long time now. The opportunity to mentor young men during such an impressionable time in their lives, on and off the field, is something I cherish,” said London.
London’s coaching style will stress fundamental pitching and defense, and will feature hitting, hitting and more hitting. “We’re going to have a high-octane offense and look to put pressure on teams,” emphasized London.
The MLB Urban Youth Academy Collegiate team, Ayala High School and Serra have all reaped the rewards from London’s baseball leadership. London has also established himself in the club baseball world as a headman for the Los Angeles Cavemen.
Athletic Director Dabbs thinks the future is bright for Serra’s baseball program. Dabbs said, “Our players and families are going to benefit in so many ways. London’s character, passion for instruction and developing young people to reach their potential is top-notch all-around. Pun intended, we hit a homerun.”
Print