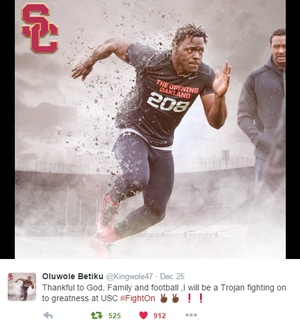 Oluwole Betiku to be 21st alum to play at USC
--
The inspirational story of Junipero Serra High School’s Oluwole Betiku continues to garner national attention. Betiku, 6’4”, 239 lbs., was originally born in the African country of Nigeria. In only his second season playing the American version of football, the 5-star rated player is now considered the top prep prospect in the 2016 class at the defensive end position.
Betiku announced via Twitter (@KingWole47) on Christmas day his commitment to continue his education and playing career for Head Coach Clay Helton and the University of Southern California. The post reads, “Thankful to God, Family and football, I will be a Trojan fighting on to greatness at USC. #FightOn ✌ 🏿️✌🏿 ❗️”
Betiku is a solid student in the classroom with above a 3.0 grade point average and considered the University of California, Los Angeles, the University of Notre Dame, Florida State University and Texas A&M University before committing to the Trojans.
The news of the Serra Cavalier’s announcement sparked immediate reaction from top news outlets from around the country. A feature detailing Betiku’s life is scheduled to air nationally on ESPN in the coming weeks.
The Serra-USC connection is nothing new. Betiku will join teammate and standout cornerback C.J. Pollard at USC. Betiku’s commitment marks the twenty-first time that a Serra football player will go on to play at USC.
Print