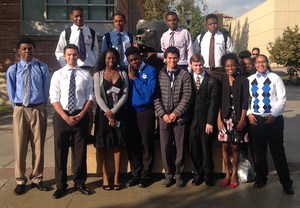 Senior Aaliyah Galwey, junior Kayla Jenkins awarded Outstanding Delegate honors
--
In only its third year as a program, Junipero Serra High School’s Model United Nation students are starting to gain recognition. At a recent competition at the University of California, Los Angeles, seniors Aaliyah Galwey and Kayla Jenkins earned Outstanding Delegate honors.
Galway reflected about her experience, "The UCLA college conference was extremely competitive but there is something special about representing Serra. In a lot of senses, and while debating, you're representing the bigger picture and defending an entire country's policies and position--an awesome learning experience!"
‘Outstanding’ is an appropriate description of the duo’s performances. Nearly 1,300 high school students competed at the 23rd Annual BruinMUN (Bruin Model United Nations) located on the picturesque college campus in the city of Westwood. “...BruinMUN has served as a forum for meaningful discussion, debate and discourse for high school students from all around the world...This year, we...expanded and diversified the number and type of committees we offer to provide the best experience for students…,” said Virginia Su, the secretary-general for the 2015 BruinMUN.
Model United Nations, also known as Model UN or MUN, provides opportunities for high school students to simulate what takes place between international countries at the real-life United Nations headquartered in New York. Students gain a hands-on experience by debating, negotiating and presenting on real-life foreign policy issues. The goal of the United Nations is to promote international cooperation.
Instructor Brendan Reynolds oversees Serra's MUN and is excited about what he sees in the program. “International foreign policy is so vitally important today. As a global citizen, I’m excited to see how these experiences may inspire Serra students to be our country's next great international diplomat,” said Reynolds.
Senior Tommy Bothwell played a large role in founding Serra’s MUN program in Fall 2013. Bothwell garnered the role of lead delegate at the New York National High School Conference last year and will likely have the same honor later this year in March. Bothwell, who is considering top colleges around the country, loves the platform of Model UN. "It's the coolest thing. I like being forced to think on my feet. We prepare like you would not imagine, but to be successful, collaboration amongst the team and being well spoken is huge," said Bothwell.
Serra next competes in the LAIMUN (Los Angeles Invitational Model United Nations) from December 5-6 at Mira Costa High School.
Print