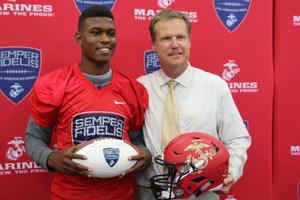 Since 1950, an impressive 92 Serra Cavaliers have been tabbed as all-Americans in a multitude of sports
--
Members of the Unites States Marine Corps, representatives from the Semper Fidelis All-American Bowl, Junipero Serra High School students, faculty, staff, coaches and administration, as well as C.J. Pollard’s family, celebrated the senior defensive back and wide receiver for being named a 2016 Semper Fidelis All-American. The event held this week on Serra’s campus was part of a national selection tour coordinated by the bowl game.
Pollard’s designation marks the third time this year that a Serra Cavalier has earned a prestigious national honor. In September, Pollard’s teammates, defensive end Oluwole Betiku, committed to the University of California, Los Angeles, and defensive back and wide receiver, Brandon Burton, uncommitted, were tabbed as Under Armour All-Americans.
Longtime head football coach, Scott Altenberg, knows a thing or two about guiding teams with multiple all-Americans. He said, “We are proud that C.J. will not only represent himself and his family at the game, but also his teammates, coaches, teachers and administration. He’s earned it to play against the best from around the country, and he is a fantastic representation of what it means to be a Serra Cavalier.”
Pollard, who boasts a grade point average over 3.0, will follow his father’s footsteps and play for the University of Southern California in college. Marvin Pollard was a standout defensive back for the Trojans from 1988-1991.
Josh Dabbs, athletic director and defensive coordinator, is thrilled that Pollard has continued Serra’s all-American tradition. “If you play at Serra, it means something—It means you compete. When you look up in our gym and see the long list of all-Americans, that’s a standard that has been created over a long period of time and it’s fun to see our guys aspire to achieve that standard year in and year out.”
Since 1950, an impressive 92 Serra Cavaliers have been tabbed as all-Americans in a multitude of sports.
Pollard, 6’2” and 192 lbs., will play in the 2016 Semper Fidelis All-American Bowl scheduled for Sunday, January 3, 2016 at 6 p.m. PST at the StubHub Center in Carson, Calif. The star-studded showcase will be broadcast on Fox Sports 1.
Photos
View photos from the ceremony [+HERE].
Print