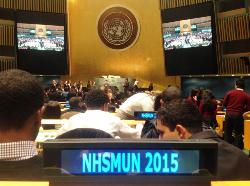 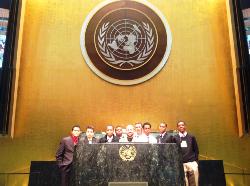 NEW YORK, NY (March 2, 2015) – Serra High School’s Model UN team participated at the National High School Model United Nations conference in New York, NY from March 2 through March 7th.  Serra was considered a small school delegation, with only 8 delegates and were given the nation of Papua New Guinea to represent.  Since it was the school’s first time at this conference, the team was not given the opportunity to be in any specialized committees such as Security Council or Historical Security Council.  However, the students were given high praises by the chair people in their committees, for example, that the Serra students were displaying excellent use of team work, were highly involved in debate, and in some cases, actually controlling the flow of conversations in the room that ultimately led to solutions creation and resolution writing.

Brendan Reynolds, coach of the Model UN team, says, “This was an invaluable experience for the students who attended, and not only that, but since there were over 3800 kids in total attendance, Serra can now say that its MUN program competed at the largest conference ever held in the entire world!  This is a great step for our program, and I am confident that we will only get bigger and stronger from here.”