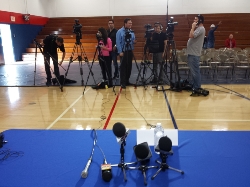 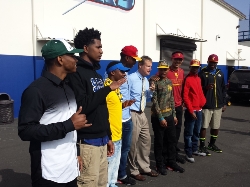 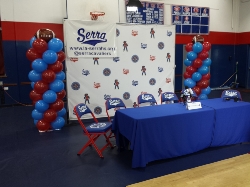 GARDENA, CA (February 4th, 2015) – Few high schools have to deal with a “quality problem” like having to find a makeshift media room for reporters to interview their students after National Signing Day. After Adoree’ Jackson’s decision last year to attend USC was broadcast nationwide by ESPN, became a trending topic on Twitter, and generally consumed the Los Angeles media landscape for a few hours last February, the athletic and marketing departments have had to adapt to the new challenges of being a school that garners a lot of attention on this day.

This year, there were two students in the national spotlight: seniors Rasheem Green and John Houston. Both made their decisions to attend USC live, and both had a quick lesson in how to juggle questions from a long line of reporters standing behind many microphones and cameras. Both handled it as well as any senior in high school could –honestly, and without pretense. Before the interviews, though, Serra coaches and athletic staff wanted to make sure that Green and Houston sat with the other players on the team who were signing their letters for the rest of the ceremony. “We wanted them to finish as a team, not as individuals, because that is what got them to this moment in the first place,” said Athletic Director Josh Dabbs. Each player was shown a short clip of highlights, followed by a few words from head coach Scott Altenberg.

After the media circus slowed to a fizzle, and all the pictures and celebrations were winding down, the Alumni Department sent out a newsletter to all its followers titled: “Division 1 Signees Averaged 3.06 GPA”. While good media attention is mostly positive for Serra, the fact remains that all students-athletes are students first and foremost. Moreover, these students will be walking across the stage in June for an even bigger accomplishment – graduating with another class of 100% college attendance. For a school that is known nationwide as an athletic powerhouse, that reminder needs to be shouted loud and often. Again, a uniquely quality problem for this little school in Gardena.

Here is the complete list of seniors who signed with D1 schools yesterday: