With its international program, Serra is building a bridge from West to East 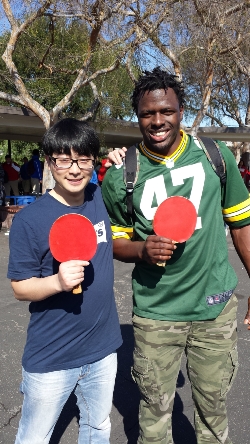 GARDENA, CA (January 27th, 2015) – You would have said that Serra was one of the most diverse schools in Los Angeles before the 2014-2015 school year. With the creation of the International Program last summer, however, Serra stands as one of the schools with the fastest-growing international populations in Southern California. The students, primarily from China, but also from Nigeria, France, Thailand, Korea and Vietnam, have created a true melting pot of cultures and experiences that can be witnessed daily on campus.

Last Friday, the international students from China, along with their Serra Ambassadors, took a trip to the Huntington Library to see the estate and receive a personalized tour of the Chinese Garden and Tea House. Many Cavaliers on the trip said it was a unique perspective to witness Chinese citizens experiencing their own culture on American soil. For some of the Chinese participants, it was a learning experience for them as well. “I didn’t know some of the things the tour guide was telling us. It’s nice to see that so much detail and respect was paid to our culture,” says Dianxiong Wang, a 10th grader. After the tour, the students from both cultures found a common language in their enjoyment of free food.

This week, Serra hosts a group visiting for one week only. They are mainly middle school students who have come to America to observe classes and visit major U.S. cities. It also happens to be Catholic Schools Week, a concept unfamiliar to them for many reasons. Serra holds annual celebrations during this week, mostly during lunch. Students can be seen playing musical chairs, ping pong and dance contests. One of the schools international students from Nigeria, Oluwole Betiku, decided to face off against Jack Spears (Americanized name), a chaperone for the visiting group from China. After an exciting match, the two slapped hands and exchanged greetings. You would have assumed they had been going to high school together all year.
Print