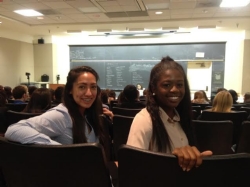 The team took 13 delegates to the conference: Tommy Bothwell, Malcolm Sabal, Teuila Pele, Lanae Cooper, Sean May, Freddy Soltero, J'Son Jones, Justin Shepherd, Jorrod Cook, Breanna Vera, Alondra Carranco, Jamiel Clark, and John Calderon. While our students did not come away from the experience with any awards, everyone put in a lot of effort and gained valuable knowledge of what to expect at conferences of this caliber.  All students are ready to work even harder for their next conference experience, which will be the Los Angeles Invitational MUN conference, held by Mira Costa High School MUN on Saturday December 6th, 2014.