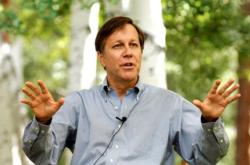 Dana Gioia, the USC Judge Widney Professor Of Poetry And Public Culture, has been named the recipient of Aiken Taylor Award for Modern American Poetry.

Gioia, celebrated for his poetry, criticism and arts advocacy, joins a who’s who list of the greatest contemporary American poets who have already been bestowed this national prize honoring lifetime achievement.

“I wanted to combine the past and the present—to take the richness of literature and combine it with the energy of movies and popular song to create a new sort of poetry,” Gioia said. “I was not interested in writing just for academics or intellectuals.”

The Aiken Taylor Award will be presented Feb. 19 at the University of the South, in Sewanee, Tenn. Poet Laureate of Colorado David Mason will lecture on Gioia’s poetic career the previous day.

“Drawing on his array of talent—as a creative artist, scholar, and advocate—Professor Gioia shines a spotlight on the world of American poetry, while establishing his own poetic voice as one of the most profound and distinctive of our time. Our academic community is delighted to celebrate this well-deserved recognition,” said USC Provost Elizabeth Garrett.

Sewanee Review, the poetry journal at the University of the South which administers the award, cited not only Gioia’s poems but his impact on poetry itself.

“Perhaps no other poet in recent times has, with a combination of criticism, policy, and, above all, exemplary poetic work, sparked as much conversation on the role of poetry in society,” the Sewanee Review writes.

Many of the previous 27 winners—including W. S. Merwin, Gwendolyn Brooks, Billy Collins—are part of the pantheon of poets who have become part of the popular culture.

“Dana has been a good observer and critic of recent American poetry and we’ve profited from that,” said two-time Pulitzer Prize winner Richard Wilbur from his home in Massachusetts. Wilbur was the second winner of the Aiken Award in 1988. “Dana is two things: He is a practical man who exists in the practical world. He can run a government agency with honor and at same time focus altogether on writing poems and do them very well indeed.”

Gioia has garnered much acclaim for his mix of business acumen and his ability as an artist.

Gioia’s time leading the National Endowment for the Arts—and founding such initiatives as Shakespeare in American Communities, Operation Homecoming: Writing the Wartime Experience, and Jazz Masters—led Business Week magazine to dub him “The Man Who Saved the NEA.”

For many years, Gioia was called “the business poet” because after earning an M.B.A. from Stanford University, he became vice president in marketing for the General Foods Corporation.

But the lasting mark that Gioia will leave is on the written word. The New Formalism movement that Gioia sparked exemplifies a freedom of style that can happily include the discipline of structure or the cadence of everyday language. That mash-up of styles is de rigueur today. Gioia's poetry has been translated into Chinese, Russian, Spanish, Arabic and other languages. It has also been widely reprinted, including in the Norton Anthology of Poetry and the Oxford Book of American Poetry.

Gioia has released four books of poetry; translated two collections of poetry; penned three collections of criticism and three opera libretti; and served as an editor for over thirteen anthologies and handbooks. His third collection of poems, “Interrogations at Noon,” won the American Book Award.

Gioia’s approach to poetry has much to do with his childhood in Los Angeles, where he was raised by a Sicilian father and Mexican mother and became the first in his family to go to college.

“When growing up in L.A. in the ’60s, how can you not recognize the cultural energy around you?” Gioia said. “How do you transform that level of intensity to the solely verbal form that poetry requires?”

Not only did he strive to allow poetry writing to be more dynamic, but also to make poetry accessible. In his controversial and influential essay, “Can Poetry Matter?”—published in The Atlantic in 1991—he laments the confinement of poetry to academic circles.

That philosophy led to some of the accomplishments Gioia is most proud of. The Poetry Out Loud program engages 400,000 high schools students every year. “Exploring Form and Narrative,” which he co-founded with Michael Peich, is now the largest annual poetry-writing conference in the U.S.

“When literature is cut off from popular culture, it atrophies,” Gioia said. “I wanted to get poetry out of the classroom.”
Print