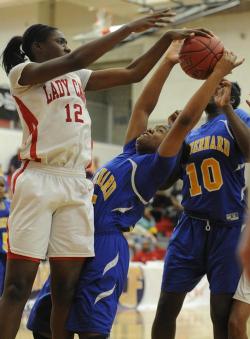 Cavaliers finally make it to state finals after being denied in two earlier tries.
By Tony Ciniglio, Staff Writer

In the closing minutes of the fourth quarter, Hailey received a pass from Siera Thompson and sank a 3-pointer for a seven-point lead.

At that point, the idea of advancing to the CIF state finals in Sacramento became much more real to Serra after two previous failed attempts.

"It was just confidence," Hailey said.

Serra blazed to an early lead, continued to attack and eventually produced a wire-to-wire 63-54 victory to punch its first ticket to a CIF state final.

"We've been counting down the number of quarters we have left in the season," Serra coach McKinsey Hadley said. "Today we said there were eight quarters left. Now we have four.

"That was the mindset we used to get to this game."

And the Cavaliers have been thinking of this moment for a while. They had experienced heartbreak against St. Joseph/Santa Maria and La Jolla Country Day in the past two seasons and were determined for a better outcome this time.

"It's kind of surreal," Hailey said. "In the locker room, all the returners could think about was how we came up short

"We didn't want to feel that way again."

Serra opened the game with 3-pointers by Hailey and Thompson and raced to a 13-1 lead.

St. Bernard battled back, took control of the boards and inched closer. In fact, St. Bernard got within 49-48 with 4:31 left in the game before Serra put the match away with an 11-0 run.

"The coaches told us to keep attacking and not to settle," said Thompson, who finished with 24 points. "I'm just really happy. I'm kind of speechless. It's a good feeling. It's a blessing really."

It was particularly bittersweet for St. Bernard, which received inspired efforts from Chyanne Butler who was nursing an ankle injury, and Lajahna Drummer, who was playing in only her fifth game since returning from knee surgery.

"At the beginning of the game it was cool, but then I came down on it wrong twice," Butler said. "I'm still proud of our team, but I knew we could've had a better game."

13 points and 14 rebounds for St. Bernard. Demoria White added 11 points with three 3-pointers, and Michelle Curry had five points and 12 rebounds. But St. Bernard was just 1 of 10 from the free-throw line in the fourth quarter.

"My team gave it all they can give," St. Bernard coach Bo Corona said. "I'm not at all discouraged. There's nothing to be ashamed about They battled.

"No excuses. Serra beat us fair and square."

Howard re-established herself in the fourth quarter. She finished with eight points, 13 rebounds and four steals, allowing Serra to pull away late.

It was particularly impressive, considering Howard entered the fourth quarter with four fouls. One more would have put her on the bench and left Serra lacking an inside presence.

"I had four fouls, and the last time I was in foul trouble against them we lost," Howard said. "I knew my coaches were depending on me to play safe and get my rebounds.

"Everyone stepped up today and played a little harder because they knew what was on the line," Toler said.

"I can't wait for us to get to Sacramento. We have some unfinished business. All I can say is see you in Sacramento."