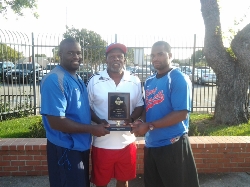 In thrilling fashion, the Cavaliers won the Fall Wood Bat League for the second consecutive year by defeating Pacific Palisades, 15-14.

The Cavs reached the championship game by defeating the White Sox Scout team 4-2 on strong pitching performances by Mateo Brambila and Khalil Denson. Ryan Dobson led the team with a triple and single.

In the championship game, the Cavs fell behind 9-1 and fought back to edge Palisades in seven innings. Tim Ravare, Duncan McKinnon and Khalil Denson led the team in hitting with three hits each.

Robert Hunt came in to relieve and pitched two solid innings and held off the Palisades offense long enough for Khalil Denson to close the game out by pitching a shutout seventh inning.

Khalil Denson was named the MVP for the championship game as he came in and earned saves in both games.
Print