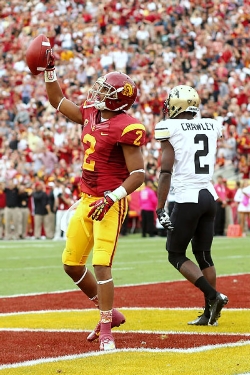 Los Angeles, CA, October 20, 2012 – When Robert Woods played football and ran track for two of Serra High School’s championship teams, many knew he was going to continue to set records and stun audiences further into his career. This past Saturday, when USC beat Colorado 50-6, he did just that.

With a jaw-dropping four touchdown catches in 35 minutes of the first quarter, Woods set not only a single-game school record for TD catches, but he also topped the USC career receptions list with number 217.

After Woods caught the record-setting pass, he was given a standing ovation and a video tribute played on the big screen at the Coliseum. During the video, he pointed to an “O” on his wrist wrap, which honored his late sister Olivia, who died of cancer when Robert was a sophomore at Serra.

The video, linked below, featured star athletes from around Los Angeles congratulating Robert on his achievement.