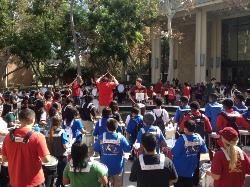 Gardena, CA, September  29, 2012  – The Serra Band has been getting attention from Loyola Marymount University and USC recently, due to the connection the program’s directors have with the respective universities. Last month, thanks to the affiliation Director David Gonzalez has with the USC Band (he is on staff there as well), the Serra Band was invited to attend the 2012 "Training for Troy" on September 29th at the USC Campus. The day included observing the spirited 300 member USC marching band rehearsal, an impromptu concert, music sectional time with the USC staff and playing with a 1,500 piece band on the Trojan Band’s practice field.

Across town at LMU, fellow Serra Band Director and Music teacher Chris Adachi was featured in the LMU Magazine for his experience with the PLACE Corps program. The article featured a Q&A with Mr. Adachi about his experience with organizing a Serra Jazz Club performance at an esteemed jazz venue in Los Angeles.

Both directors have expressed a desire to make Serra’s Band a college-caliber program. Gonzalez frequently includes Trojan Band members in the Serra Band’s performances during football and basketball games, bringing experience and mentorship to the students. Adachi brings friends from the music community into his classroom to teach theory and give one-to-one lessons.