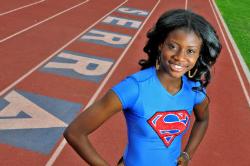 Finally, Serra senior track and field star Alexis Faulknor broke free from her injury restraints this season and delivered the command performance that had been simmering inside her throughout her high school career.

Faulknor captured the state long jump title, anchored the 4x100 relay to a state crown and added second-place state medals in the 100 and 200 - not bad for a day's work.

Most importantly, Faulknor was the lynchpin who accounted for 32 points in Serra's first-ever girls state team title.

"This is exactly what I look like when I'm not injured," said a beaming Faulknor, the 2012 Daily Breeze Girls Athlete of the Year.

In her sophomore year, Faulknor was sidelined by an oblique muscle injury and a hamstring injury. In her junior year, the hamstring continued to hamper her.

This season, Faulknor made sure a quad injury and her familiar hamstring injury did not prevent her from reaching her potential, even if she did have to don a large gray sleeve on her leg as she navigated her way through eight events in the season's final two days.

"She was not 100 percent, and she still was wearing a sleeve on her lower hamstring, but with her being a senior, she really stepped to the plate," Serra coach Lori Smith-Thompson said.

Faulknor said she was not going to be denied in her senior year.

"I had to earn my scholarship," the University of Central Florida recruit said.


That meant physical therapy 2-3 times per week every week throughout the season. And it meant absorbing the pain as only top-caliber athletes can.

"I just had to run through it and go to my therapy," Faulknor said. "At some track meets, I was in a lot of pain. At Mt. SAC, I jumped but I did not run. At CIF, I was not all the way healed, but I still ran through it.

"On the second day of state, my legs felt so heavy and my quads were hurting. I was so tired. But my dad reminded me it was almost over."

Her father's words have always resonated with Faulknor.

Oh by the way, Chris Faulknor also ran for Jamaica in the 1988 Olympics on the 4x100 relay team.

Yes, there is Jamaican blood in Alexis Faulknor.

"Everyone says that's why I'm so fast," Faulknor said, laughing.

"They both help me so much," Faulknor said. "They tell me to work hard, even when I do not feel like it. And they always tell me don't forget what you practice, especially at the big meets."

For all the heartache and pain caused by having her last two seasons cut short by injuries, Faulknor enjoyed a spectacular five-minute stretch at the CIF state meet.

After idling in fourth place through her first five jumps, Faulknor had to make a quick wardrobe change to run the 4x100.

Faulknor changed into the correct colored uniform in the long jump tent.

She switched out her jump shoes for her sprint shoes and picked her mark quickly for the relay.

Then Faulknor anchored the 4x100 relay of Jade Pavajeau, Renetia James and Maya Brown to a 45.92 victory, overtaking two top runners down the stretch.

Perhaps amped from her exhilarating victory, Faulknor returned to the long jump pit for her last jump and unleashed a 20-foot, 3-inch leap that was both massive and victorious.

Serra jumps coach Russell Biggs said while Faulknor's athletic abilities are impressive, her competitive nature separates her from her peers.

"In fact, the only reason she didn't get 21 was her past injuries. I have no doubt when she performs in college - wow! She had so many injuries and she had to take on so many events in high school ... I would not be surprised if she hits 22 feet in college.

"Being healthy at the end made all the difference for her."

Faulknor said she was so thrilled about how she concluded her career.

"It's been hard the past two years," Faulknor said. "To end my senior year like this, with two golds and two silvers, is probably the greatest thing for me."