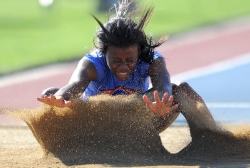 CLOVIS - The fireworks began. The podium climb came next. Then came the paparazzi moment.

Cameras, smartphones and even some iPads flashed on the Serra girls.

Family, friends, coaches and even some of the athletes wanted to capture the championship moment for a program whose time had finally come.

And both relays came up victorious as the Serra girls racked up 60 points, blowing past Oceanside's El Camino (36 points) for the program's first state championship.

"This feels amazing," James said, taking in the moment.

But the Serra boys were sullen about a heartbreaking finish in which the Cavaliers just missed winning their first state team title since 2000.

The Serra boys rode an impressive victory by Adoree' Jackson in the long jump with a massive, jaw-dropping jump of 25 feet, one-half inch.

Then there was Lloyd Siscard's surprising 110 hurdles comeback victory in 14.09 that gave Serra hope.

Ultimately needing a second-place finish to clinch the team title in the final event, the Serra 4x400 relay team of Ronnie Hall, Jackson, Darrell Fuery and Randall Bennett could not close the deal and finished sixth.

They had to settle for a second-place team finish behind Notre Dame of Sherman Oaks.

"The girls stepped up. They weren't even predicted to win," Jackson said. "But with us, I guess you just can't take anything for granted.

"I have no regrets. I love my team and I loved this season. I thank my coaches and I thank God for putting us in this opportunity."

For the Serra girls, it started with a wardrobe change.

Faulknor was middling in the long jump in fourth place, unable to land a quality mark in her first five attempts.

Then the 4x100 relay was about to start, and a teammate rushed her a different colored-uniform.

It was no phone booth, but Faulknor changed her blue uniform for a red uniform in the long jump canopy and rushed out to her spot on the anchor.

Then the relay of Jade Pavajeau, Renetia James, Maya Brown and Faulknor rallied for a 45.92 victory with Faulknor providing a spirited final push to overtake rival St. Mary's Academy.

"I felt so rushed. I walked over there and didn't even get my mark down," Faulknor said. "I wanted to get water and they said no. And I was doing bad in the long jump. I just wanted to do well.

Perhaps jacked about her performance in the 4x100, Faulknor returned to the long jump and unleashed a 20-3 personal best that shot her to the top of the leaderboard on her final attempt.

"I was running so fast on that runway," Faulknor said. "I think I was so amped about the 4x100. I was running back and forth. To the interview area, to the medal stand, back to the long jump. I had a lot of adrenaline going,"

"I feel so great right now," Faulknor said. "This is my last high school meet, and I got two golds and two silvers.

"I'm happy. We're all happy. The boys are kind of sad, but they ran their hearts out. It's kind of bittersweet that this is my last year."

"I almost cried out there, and I never cry. I just don't cry. I chased my title, and it felt great," said James, wearing a shirt that read, "Don't hate because God gave me speed."

"All I did was use my blinders. I don't pay attention to the other racers. I run my own race, and I ran it just the way I wanted it."

Urina Harrell added a fifth-place medal in the shot put with a 43-2 1/4 mark.

Serra already had the team title clinched entering the final race, but the 4x400 relay of Megan George, Kayah Agudo, Maya Brown and James hammered it home with a 3:46.45 victory.

"I didn't want to come in any other place," said James, who closed the 4x400 with a 52.8 split to outlast Harvard-Westlake star Amy Weissenbach down stretch.

Siscard provided a jolt for the boys by winning the 110 hurdles, taking advantage of a tumble by UCLA-bound football player Kenneth Walker of Richmond.

Siscard roared from the back of the pack for an improbable title.

"We had a meeting last night, both teams. We decided we had a unique opportunity to try for both team titles, and we came with the mindset that we were going to put it down," said Siscard, who added a fifth-place medal in the 300 hurdles in 37.77. "That's what I tried to do in that race."

Immediately after the race, Jackson launched himself for the 25-0 1/2 long jump, even flexing and pumping his fists.

But then Jackson decided to go for another long jump attempt and landed awkwardly on his left heel. He was treated on the field, got ice taped to his leg and stumbled his way to the podium, even leaning on runner-up Jordan Monteiro-Williams of McClathchy.

Jackson gathered enough gumption to give it a shot in the 4x400, but it wasn't meant to be.

Ronnie Hall appeared a bit gimpy on the first leg. Jackson sucked it up with a solid second leg, and Darrell Fuery made a valiant effort in the third leg.

Randall Bennett made a valiant run and appeared to close the gap, coming right up on Carson's Kymoni Bellamy.

But Bennett took an elbow from a different competitor, stumbled and was just inches from the finish line, having to literally roll over to a sixth-place finish of 3:21.06.

The team title was not meant to be this season, though Jackson gave it his best shot.

"We're not going to take anything for granted anymore, I promise you that."