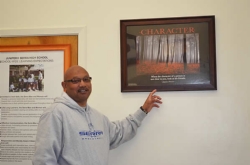 Great article in The Tidings on Dwan Hurt, who will be honored in Saturday's Dedication to Excellence Celebration on campus.
Written by Doris Benavides Friday, 20 April 2012 13:44

Growing up in South Central Los Angeles, Dwan Hurt was prey to gangs, but the faith instilled in him by his single mother grew so strong that gang members respected him and even protected the 6-foot-2 adolescent.

Today, 25 years later, he says it has been the best decision he has ever made in his life. The Arkansas-born Hurt has been mentoring numerous youth who have walked the halls of his alma mater, Junípero Serra High School in Gardena. For his dedication, the basketball coach and longest-serving dean of students in the history of the school will be honored at Serra’s April 21 Dedication to Excellence Celebration where the keynote speaker will be Jay Hillock, director of pro personnel for the Chicago Bulls, who coached Hurt while he played for Gonzaga University in Spokane, Wash.

“This is one of my favorite figures,” said Hurt, a parishioner at Gardena’s Maria Regina Church, while bouncing a basketball and pointing to a huge poster of Pope John Paul II in Serra’s basketball gym. “In this school I grew up from a young man to a man.”

“And this is my mantra,” he noted, pointing to a big sign on the wall of the school’s cafeteria. “Siempre adelante, always go forward,” he read — the motto of Franciscan Missionary Blessed Junípero Serra.

The 1981 Serra alum reflects on how his mother and his grandmother helped shape his character, as well as Msgr. Sabato “Sal” Pilato, who chose him as dean of students 12 years ago, when the priest was the school’s principal.

“His faith and leadership really had a lasting effect in my life,” he said.

To which Msgr. Pilato, now archdiocesan superintendent of high schools, replied, “I have known Dwan since I arrived at Serra High in August of 1996. He has been a dedicated teacher, coach and a mentor to many young men and women. It has been a privilege to know him and work with him and to watch him grow into his vocation as a Catholic educator.”

Following a ‘strong voice’
With a bachelor’s degree in physical education with emphasis in basketball from Gonzaga, the 49-year-old Hurt — father of a 16-year-old girl, a three-year-old boy and two teen step daughters — could probably be earning more money working for the National Basketball Association or a college conference. He instead chose mentoring young at-risk kids, following a “strong voice he had never heard before” while lying one day in bed at his dorm room “crying” because he was uncertain about his career/life path.

“I was in my dorm room at Gonzaga,” he recalled, “when I heard this voice telling me to go back to where I come from [Serra High School] to teach kids and be a great role model for them and help in their path, so theirs won’t be as difficult as mine was.”

Nevertheless, once graduated he accepted an assistant coach position at UC Santa Barbara. But then Hurt — who once thought of becoming a priest — turned it down because “I knew I needed to stay here, I needed to grow more spiritually and in everything else.”

Later he came to understand that being at Serra is his calling.

“It was a struggle between basketball and my faith, because there’s a lot of money out there, but it was because of my faith that I played basketball, so I had to put it in perspective.”

It was not until he was well in his 20s that he met his father. He did it just to make sure he had not missed anything, because he always believed that his mother Alice Hurt — a teacher at the L.A. Unified School District — was the “best mother and father” he ever had. He even wrote her a letter with those words. She passed away four years ago.

Like every good teacher, Alice was very strict at home with her four children (two boys and two girls; Dwan is the second oldest). The day he dared to leave the house after arriving from school, while she was at work, he really understood what kind of parent he had. “It was a big time punishment,” he recalls. “My mom even cried and that hurt me.” He never did it again.

From his grandmother Jamima McKelven, he learned to follow a routine of night prayer and by sixth grade he memorized Psalm 23, which he believes is part of what kept him protected in the streets.

“I was definitely an at-risk youth; things were rough at home,” he reflects. His mother’s salary was not enough to feed four children, but she managed to keep all of them in Catholic schools, which was a reason why they were respected by other at-risk kids, plus Dwan’s basketball skills added points to the admiration. Gang members (some of whom had been his childhood friends) respected him and even protected him.

Plus, he said, “I was very comfortable with who I was; not the peer-pressure type of guy.” And he has never been a “materialistic” person either, he admits. “I drive a 1997 Toyota Camry,” he added with pride. “And I still attend Mass every single Sunday.”