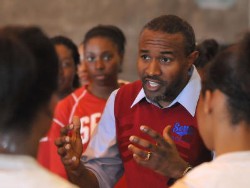 Serra's leader cuts back on technicals, Cavaliers respond
Not so long ago, Serra girls basketball coach McKinsey Hadley was a vocal force on the sideline.

Hadley certainly got results, but also had his share of technical fouls.

He was more like Bobby Knight, save for the chair-throwing.

"I had an epiphany," Hadley said. "What we do today affects our future."

The championships certainly keep piling up for Hadley and his coaching staff.

And the technical fouls were kept much more manageable - just one this season - a dramatic improvement from years past. Hadley and his staff became much more reserved and that infamous Hadley confidence showed through.

"If you use the refs or other fans as a scapegoat, it does not help your players," Hadley said. "I never thought I was out of control, but I learned you have to focus on you and not worry about the other stuff going on around you.

"The best result is not to give anyone any excuses. You have to tell yourself before the game that the refs aren't going to be on your side. If you don't get the calls, then it's OK. It's what you expected. If you do get the calls, great, that's a bonus."

With a renewed focus, Hadley and his staff of Derek Gray and Will Hailey did some of their best coaching en route to his third consecutive Daily Breeze Coach of the Year award.

There is no disputing Serra had the most talent-laden team in the South Bay with Rejane
Advertisement
Verin, Simone and Siera Thompson, Deandrea Toler and Caila Hailey having the potential to run most other teams off the floor.

But Hadley and his staff still blended several moving parts together following the graduation of four-year star Bria Richardson.

Serra won a share of the Del Rey League, which Hadley calls "the super league."

Then Serra made an impressive run to the CIF Southern Section Division IV-AA title, beating highly regarded Windward 82-77 in triple overtime in a memorable final. Hadley simply called the reconfigured Division IV-AA "scary," and the general consensus was that Windward could not be defeated.

Then Serra advanced to its second Regional final in a row. It was also the school's first 30-victory season.

And each passing year seemed to come against better and more premier competition.

"That's the goal - that's what we talk about. We want to be better than the year before," Hadley said. "Last season was going to be tough to duplicate, but they got a taste of the state playoffs and they were hungry. Our staff was hungry. We were all hungry."

Hadley knew that with such a devilish playoff division that featured two state champions, three CIF champions and six CIF finalists from the year before, he couldn't afford to back down from anybody.

So Hadley took on a tough tournament schedule - the Rialto Tournament, the Redondo Sea Hawk Beach Classic, the Oaks Christian Tournament. All to prepare for the road ahead.

"We were not intimidated by anybody," Hadley said. "Some were fearless. This year we weren't taking anything for granted."

Hadley also said the chemistry was just right for this team.

"This group genuinely loved each other," Hadley said. "They constantly said, `let's do it for the seniors.' They've really grown together. This was one of the most fulfilling seasons."