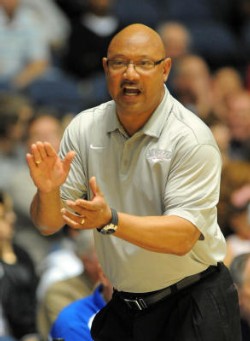 The leader of Cavs drove his players to be better.
An athletic, talented team with a chip on its collective shoulder is dangerous indeed, and that's what Serra coach Dwan Hurt had on his hands.

It's been well-documented how Serra was stripped of its Del Rey League title last season and not allowed to participate in the CIF Southern Section playoffs for using an ineligible player.

Serra has always maintained that it was innocent in a paperwork issue and has used the misfortune to fuel its fire this season.

It was the job of 25th-year coach Hurt to harness the emotions from the disappointment, as well as harness the athleticism - in some cases raw - so evident on the club.

"I went to our athletic director (Ted Dunlap) and I was sick to my stomach about it all," Hurt said. "I've always run a clean program. It really hurt me.

"I told Dunlap I wanted to rebuild it right, with character, and change the perception people have about our program."

Hurt, the Daily Breeze Coach of the Year, kept on his players about getting better on and off the court.

"We'd have talks before practice about character and becoming better people, getting better grades," Hurt said. "My first grade check no one was under 3.0."

Serra players achieved in the classroom, conducted themselves in a respectful manner and performed well on the court for Hurt, who built a defensive juggernaut led by tenacious guard play and daunting post defense.

"This team is really special - one
Advertisement
of the best I've ever coached," Hurt said. "I put a lot of pressure on them from beginning to end, but boy did they respond."

The Cavaliers grabbed the Del Rey League title that was taken away from them last year by going undefeated in league play.

Then Serra won one of the best divisions in the CIF Southern Section - Division IV-AA - which boasted a deep field of private school powers.

"Winning our league and then winning Division IV-AA was such an exhilarating feeling, especially being one year removed from our CIF ban," Hurt said. "To come back and capture the crown - I was ecstatic and overjoyed."

Hurt helped mold some raw but talented and athletic players, like Daily Breeze Player of the Year Daddy Ugbede, into star performers.

"Coach Hurt taught me to work hard and go hard to the basket," Ugbede said. "He pushed us to play hard in practice and in games."

Serra (31-3) appeared headed to the CIF State Division IV final, but was derailed in the Southern California Regional final by Price 73-66.

It was essentially the only disappointment in a season full of triumphs.

"Although we didn't win state, the growth I've seen in everyone has been great and I'm overjoyed, that's what means the most," Hurt said.

Hurt said already he has one player, John Nash, going to Cornell, and others close to committing to other fine universities.

Hurt's players appreciate what he did for them.

"He helped me a lot," senior star Dakarai Tucker said. "If I messed up he would take me aside and talk to me. And he kept pushing me and I appreciate it. If not for him, I would not be as good as I am."

Hurt said probably the best thing he did was drill home the point that his players have to be accountable and responsible.

"I challenged the team on accountability, which means a lot in this day in age because no one wants to be held accountable," Hurt said. "It started with the seniors and had a trickle-down effect on the rest of the team. That's why we had such a great year on defense. We held each other accountable on the defensive end and with sharing the ball so much on offense. Every game we had different guys stepping up."

Hurt slowly is beginning to appreciate the season and what the team accomplished and enjoy what Serra basketball has become.

"The most important thing was bringing the team together," Hurt said. "Serra basketball is a family, it's a family atmosphere.