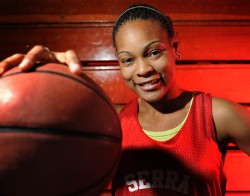 Star forward set pace for Cavaliers in their run to CIF-SS Division IV-AA title.
The moment of truth came at the season-opening Rialto Tournament after a tough loss to Centennial/Corona.

Senior forward Rejane Verin, benched for extended spurts by coach McKinsey Hadley for apparent "disinterest," made a bold statement to Hadley that set the tone for the rest of the season.

"She came to me after that first tournament and said, `Coach, I'm going to lead us to a league championship and be the MVP of the league.' I said OK," Hadley said.

Not only did Verin take control of the cutthroat Del Rey League, she put Serra on her broad 6-foot-3 shoulders and commanded the Cavaliers to an impressive CIF Southern Section Division IV-AA crown.

Overall, it was Serra's third consecutive CIF title. Verin also powered the Cavaliers to their second Regional finals appearance in a row.

"I know they didn't make me a captain, but I still wanted to be a leader for this team."

No longer was Verin a wallflower. She has transformed into a Venus Flytrap with an ability to take over a game in the low post.

"I love to run - how do you say - coast to coast," Verin said in a heavy
Advertisement
French accent, smiling brilliantly.

Verin even won her coveted Del Rey League MVP award and added a CIF Division IV-AA Player of the Year award to her expanding trophy case.

"She always had a unique skill set," Hadley said. "She's really athletic. She's as fast as our fastest guard, as tall as our tallest player, and she jumps out of the gym. This was her year to step up."

Verin stepped up in a big way in the most marquee of matchups.

After missing eight games over the winter break to return to her native Guadaloupe for her grandfather's funeral, Verin took her game to another level.

Verin also averaged 15 points and 11 rebounds in helping Serra capture the Division IV-AA title in a loaded division, including a 20-point, nine-rebound performance in an epic triple-overtime 82-77 victory over Windward and 6-7 post player Imani Stafford.

Verin also posted 12.5 points and 8.9 rebounds in leading Serra back to the Regional finals, including a 25-point, 12-rebound performance in a rematch against a Windward team missing its top two post players.

"It was a matter of her finding her own personal challenges," Hadley said. "She targeted certain games, that's for sure. She has the ability to play with anyone in the nation, especially with her unique skill set."

The Windward games were a sort of redemption for Verin.

As a sophomore, Verin said Stafford outplayed her in a CIF semifinal eventually won by Serra.

So Verin carried that into these rematches.

"That has to be my best game and my favorite game," Verin said. "It was my revenge. She had a good game and I had a bad game the first time I played her. I didn't like my game then. I was still fresh and new."

Verin was introduced to basketball attending a camp sponsored by Guadaloupe native Mickael Pietrus, a NBA player currently with the Boston Celtics.

Verin said she received a long-distance pep talk before every big matchup: a call from her mother Marcelle from Guadaloupe.

"She tells me in French," Verin said of her mother, who is also taking care of Verin's two sisters Angola and Emilie and Verin's niece Leonore. "Basically it's something like, `Play to the last whistle. Play until the end.' She's a P.E. teacher in Guadaloupe. She always had me mentally prepared."

Now Verin will be off to UNLV, set to join former UCLA coach Kathy Olivier with a chance to shine at the next level.

"Overall, I'm so delighted to see where she came from, from her freshman year to now," Hadley said. "She's a team leader now. She made every big play for us.

"She refused to lose."