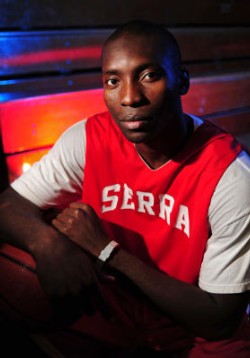 Nigeria's 6-foot-6 forward came to U.S. two years ago, helped spark Serra to a CIF title, regional final.
Daddy Ugbede made it to the United States from Nigeria to seek opportunity, and boy did he take advantage of it - eventually.

Daddy, looking for a Catholic school where he could get a good education, play basketball and advance to college, landed at Serra High for his junior year of high school but could not play varsity basketball because his paperwork was not processed in time.

"Nobody could stop him," Serra coach Dwan Hurt said. "It was relatively easy for him."

He burst onto the varsity scene this season and took just a short time to feel comfortable on the court with his teammates against varsity competition.

"He didn't start out as a captain but about five games in I made him a captain," Hurt said. "He was MVP of the Las Vegas Tournament that we won and he was so ecstatic. When we came back he opened up a lot more, like he was being accepted, people started to notice his game more."

Daddy, the Daily Breeze Player of the Year, quickly became a player who was very difficult to deal with on both offense and defense.

"He was definitely the x-factor," Hurt said. "Teams had no answer for him, especially when he'd draw bigs away from the basket and then drive or use his post moves."

Daddy said he was given his name because it is tradition where he comes from that if you are the
Advertisement
last born son they call you Daddy.

He lived in Nigeria until two years ago. He attended some basketball camps in the United States before making the move here permanently - he lives with a guardian, Julia Boyer, in Compton.

"You don't have the opportunities there you have here," Daddy said. "Here you can get a better education, and my parents allowed me to come for school and basketball if I applied myself."

The 6-foot-6 Ugbede certainly has done that. He carries about a 3.4 GPA in class and averaged 15.3 points and 6.8 rebounds on the court playing out of position.

"I started at the 3 then played the 4, that's what the team needed," Ugbede said. "I'm good at rebounding and posting up, but swingman is my favorite position and hopefully I'll play that in college. But coach said `in order for us to win you have to help the big man (center) Emmanuel' (Ndumanya)."

Ugbede became one of the most effective power forwards in the CIF Southern Section.

"In the playoffs, it was Daddy who carried us," Hurt said. "His rebounding and inside presence helped us tremendously. He improved tremendously as the season went on as a team player. He likes to play the 3, but with how everything fit with the team he sacrificed and played the 4 for us."

His teammates got a kick out of Daddy when he first came to Serra and watched him progress as a person and player.

"The first time I saw him he was really rusty and he had the biggest smile on his face," said senior star Dakarai Tucker. "It was like he was just happy to be here. I was like, `dang.' Then he just got better and better."

When Daddy finally was able to join the varsity squad as a senior, his teammates were excited about what he could bring to the team. He surpassed all expectations.

"He was aggressive and eager and he wanted it," Tucker said. "In practices and games he went all out. With me and KMack (Kajon Mack) and then the addition of Daddy, we just felt we would run everybody."

Serra defeated every team it played this season, losing only once to Bishop Montgomery and twice to Price.

Serra lost to Bishop Montgomery in the final of the Westchester Trevor Ariza Tip-Off Classic, then came back and beat the rival Knights twice in Del Rey League play.

Serra lost to Price the first time the teams met, then came back to beat the L.A. school in the CIF Division IV-AA semifinals only to lose the third meeting in the Division IV regional final.

Serra gave up 60 or more points only five times all season, and Daddy was a big reason why the team had that kind of success on defense.

"I don't like losing," Daddy said. "I always come out to compete and do the best I can. We had a lot of drive to win, and part of it was because they didn't let us have the opportunity last year.

"We had a lot of bad memories from last year. This year we made a lot of good memories."

Those memories include winning the CIF Division IV-AA title, beating LaVerne Lutheran 69-59 in the final.

"I really liked having the opportunity to play the best, and to have something nobody can ever take away," Daddy said. "And to establish ourselves as one of the best in California."

Now it's time for Daddy to pick a college, and several are interested in him, including Georgetown, Cal State Northridge and UC Riverside.

"He has a bright future, he is busy right now with a lot of colleges looking at him," Hurt said.

Daddy is enjoying the great feats he was able to accomplish with his high school team.

@breezepreps and @dthorpe888 on Twitter
Source: The Daily Breeze
Print