Traveling Memorial Reaches Gardena And Serra Is There 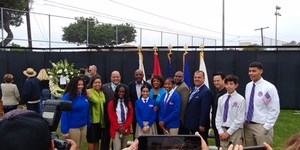 Serra Students Come To Greet Traveling Vietnam Memorial
When you go to Washington D.C, memorials abound; however, certainly one of the most moving memorials is the Vietnam War Memorial. The shiny, black edifice that has engraved within it the more than 58,000 names of American soldiers who died in the Vietnam War sits as a testament to the bravery of American soldiers in what was a very difficult time. In 1982, a man by the name of John Devitt attended the dedication in Washington, and it was at that moment that he felt that those who could not come to Washington should somehow have the opportunity to experience the memorial. The result? The Moving Wall, a half-size replica of the memorial in Washington that could be taken all over the United States.
On Saturday, April 7, 2018, after snaking across the country for decades, the traveling memorial arrived at Mas Fukai Park in Gardena, and Serra students were there to greet it along with dignitaries from the city, state, and federal government. The memorial moved all those in attendance, including the Serra faithful. Ambassadors, the L.I.F.E. team, and members of ASB, along with Mr. Murphy and Ms. Encelan made sure that Serra demonstrated that we understand the power and the significance of the memorial, and that we will never forget the contributions made by the men and women of the U.S. Armed Forces
Source: The Moving Wall, Vietnam Combat Veterans, Ltd.
Print