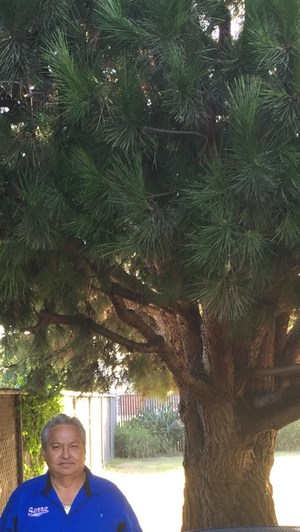 Alberto Aldana Ends Career At Serra
On October 5, 1987, a young man by the name of Alberto Aldana began working as part of the Maintenance team at Junipero Serra High School. On April 30, Mr. Aldana worked his final day at Serra High School after 32 years.  In the almost 32 years he spent at Serra, Mr. Aldana has seen many great moments, made the school more beautiful, and touched many lives with his friendliness and fun-loving personality.
Around the same time that he started at Serra, Mr. Aldana planted a tiny tree in the courtyard behind the faculty lounge. Many looked skeptically at the little sprout of a tree that Mr. Aldana planted. "No one thought the tree would live. They joked around that it was going to die. I believed that the tree would live, and look at it now," Mr. Aldana said. Yes, indeed, look at it now. The tree Mr. Aldana is pictured with is that very same tree.
Like the tree, Mr. Aldana developed strong roots here at Serra. He was known as a loyal, friendly, and hard-working member of our Maintenance Department. He was called "maestro" by his co-workers in the Maintenance Department and always brought the fun to work. "Mr. Aldana always had a little inside joke or jokes for anyone who he knew was willing to play along with him," said Mr. Ramos, the Director of Marketing and Admission at Serra. "Mr. Aldana loved to joke around with people that he cared about and always had a story to tell about his family that he loves very much." He exemplified through his work what it means to be a Cavalier. He, for almost 32 years, humbly served the Serra community, always having as his top priority the safety and security of everyone in it. We celebrate you and hope your retirement is a peaceful one, Mr. Aldana.
Print