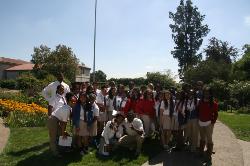 San Marino, CA, September 25, 2013: Serra students found themselves staring at the original handwriting of their school’s namesake, and all of them said the same thing: “He writes so neatly!” It was an afternoon of discovery, re-discovery and shifting perspectives as 40 of Serra’s best and brightest took a special field trip to visit the Junipero Serra and the Legacies of the California Missions exhibit at the Huntington Library in San Marino, CA. For many of the students, the pieces on display, including paintings, letters, maps and artifacts, made Fr. Serra more human, and all the more remarkable.

Some of the students noted that the exhibit painted a complicated picture of Serra – on one hand, a man of great faith and determination; on the other, a leader of the effort to bring the native population into the fold of the missions, where they would work, and in some cases, die from disease. But it was his handwriting, that facet of education that stays with us for so long, that captured the imagination of the Serra students. Perhaps because so many write on laptops and smartphones, in short, staccato sentences, or perhaps because letter-writing is a lost art, the presence of Fr. Serra’s correspondence held then in wonderment.

Back on campus later that day, surrounded by replicas of paintings and statues of Serra, the students remarked that they would no longer take him for granted. DeeAnna Segee, a sophomore, puts it best, “Now that I know how much work he put into creating the missions, I’ll never look at those sandals the same again.”
Print