Serra's James a Master in 400 meters 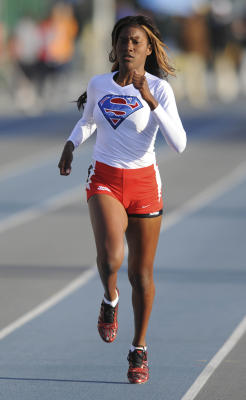 The refrain at Friday night's CIF Southern Section Masters Meet at Cerritos College was about "just qualifying" for the CIF State Championships next weekend in Clovis.

Serra senior sprinter Renetia James was having none of that.

James delivered two scintillating performances, perhaps trumpeting her arrival for Clovis and setting the stage for what could be a banner weekend for Serra.

"I don't do anything just to qualify - you're always going to get the best from me," James said.

The South Bay had three Masters champions and 26 state qualifiers, but James certainly grabbed the spotlight.

James captured the Masters title in the 400 meters with a blazing 54.41 mark, the state's fastest time this season. Teammate Kayah Agudo qualified in 56.20 for fourth place.

St. Mary's Academy runner Sierra Peterson's third leg in the 4x400 was nothing short of spectacular as she burst past three runners in the final 100 meters to give SMA a 20-meter lead before James'
Advertisement
anchor leg.

Faulknor also placed second in the long jump with an 18-11 mark, stopping after her third attempt once she made the qualifying mark. Serra's Urina Harrell also qualified in the shot put (41-11 3/4).

"I had a 19-foot jump, but I fouled by this much," Faulknor said, holding her index finger and thumb barely apart. "But the idea today was just to qualify. Our coaches told us not to worry about placing, just qualifying."

Serra's Adoree Jackson fought through a back injury that flared up this week.

Jackson was in obvious pain, but managed to get an automatic qualifying mark with a 23-6 leap to finish third in the long jump on his third attempt. And that was with him taking off a foot behind the board.

Jackson also anchored the 4x100 relay team of Malik Roberson, Darrell Fuery and Lloyd Siscard to a third-place 41.27 mark and ran the third leg for the 4x400 relay team of Randall Bennett, Ronny Hall and Fuery for a fourth-place 3:17.05 mark.

"I don't know what happened with my back, but I definitely felt it," Jackson said. "I knew I had to work through and keep persevering. I was not going to quit."

"Today was all about qualifying," Siscard said. "And this is special to me because this is my first time. I've only been doing this for 3-4 months, and this is beautiful."

It will mark the eighth state meet for Mehra - four in cross country and four in track.

Mehra even did it with a surprising kick at the end.

"I don't know where that kick came from - I'm surprised I had something left," Mehra said. "In the last 150 meters, I said to myself, `You know, I'm right there. I'm just going to go for it.'

"I feel so blessed these last four years."

PV's Jonah Diaz impressed with a third-place finish in the 3,200 in 9:05.95. Diaz decided to make a run for first place when he saw St. John Bosco rival Danny Martinez ahead of him.

"I knew I needed that last kick to make sure I qualified, so I saw Danny and decided to go for it," said Diaz, making his sixth state finals. "Every second counts."

Redondo runner Rachel Bush had been a four-time state qualifier in cross country, but had never made it in track and field. But her 10:33.92 punched her ticket.

"I was pumped for this race. I was going to give every single ounce of myself to this race," Bush said.

Redondo's Evan Malone-White began the day as an alternate in the 1,600, but qualified with a two-second personal best for a 4:12.12 mark. Chadwick's Sam Cartwright also qualified (4:14.39).

"That was fun," Malone-White said. "It was a hell of a race. Everyone was throwing out every move they had."